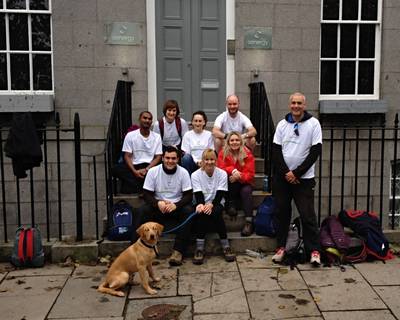 Senergy’s staff in Aberdeen walked from the company’s Banchory office to the city’s Bon Accord Terrace.

Colleagues across Senergy’s global network of operations have proven to be great sports by undertaking a series of challenges over a month in aid of a wide range of charities.

Members of Senergy’s international talent pool held fundraising events for charities of their choice with the company dubbing the month “Sportober.”

A variety of virtual cycles and innovative marathon treks saw staff clock up thousands of miles for a diverse range of well-deserved causes. In addition to the thousands of pounds that staff have raised, Senergy has pledged to donate a significant sum to be divided between all the nominated charities.

Alasdair Buchanan, Chief Operating Officer at global-leading energy services company Senergy, said: “Employees from across the world have truly got into the spirit of Sportober with regional teams coming up with a number of different creative events in the name of charity. This has resulted in an overwhelming level of support.

“Raising money for charity should be important for every business. Through Senergy’s commitment to giving something back to local communities, the company has contributed a substantial amount of money to charities around the globe since it was established. In addition to helping worthwhile causes, we are delighted that so many of our colleagues are taking an interest in their health and wellbeing.”

Among the adventurous efforts were two separate events held by the team at Senergy’s Banchory office in Aberdeenshire. Eight cyclists attempted to visit all of Senergy’s U.K. offices by cycling the equivalent of the 1,300-mile route in stages throughout October.

The second Banchory event involved a virtual running tour of the northernmost Senergy offices – from Banchory to Edinburgh, Newcastle, Aberdeen, Stavanger and Alford which is around 545 miles.

Senergy’s survey and geo-engineering team in Bath set out to ‘climb’ Mount Everest in the name of the Forever Friends Appeal, a fundraising charity set up for the town’s Royal United Hospital. Two running circuits around Bath were mapped out, each of which added 300metres to the net climb. The team collectively worked their way to the 8,848m high summit.

Across Abu Dhabi and Dubai, eight Senergy colleagues collectively cycled more than 430km around the nearby autodrome in aid of the Macmillan Cancer Support. The team covered the distance between the two Middle East offices just short of four times.

Staff from Senergy’s Aberdeen office also took part in two separate fundraising activities - a 17.5 mile walk from Banchory to Aberdeen and also a triathlon from Aberdeen to Banchory to Alford.

Members of staff from Senergy’s office in Alford, also Aberdeenshire, travelled the distance between their office and Senergy’s Bath office, by walking the same distance round Grampian Transport Museum track.

The Banchory and Aberdeen offices have chosen to raise funds for MND Scotland which supports people affected by motor neurone disease. Alford’s team has been raising funds for Macmillan Cancer Support.

Senergy’s staff members in Jakarta have taken part in a marathon, with the city’s Kampung Kids as their chosen charity. The organization provides nutrition, basic education and healthcare to needy children as well as supporting pregnant and new mothers.

One employee from Senergy’s Newcastle office pledged to raise money for Marie Curie Cancer Care by taking part in the 13.1 mile Royal Parks Foundation Half Marathon taking in the spectacular sights of London and its parks as the runners go through their paces.

In Perth (Australia) a five-strong team covered a collective 251 miles by cycling, swimming running and walking to raise funds for the Australian Cancer Research Foundation.

Established in 2005, Senergy delivers fully integrated project and asset development services across the energy industry, and has rapidly emerged as a global leader in diversified energy services through organic growth and a series of acquisitions.

Senergy became a member of the Lloyd’s Register (LR) Group in September 2013, following an agreement for LR to take a significant investment in the company.