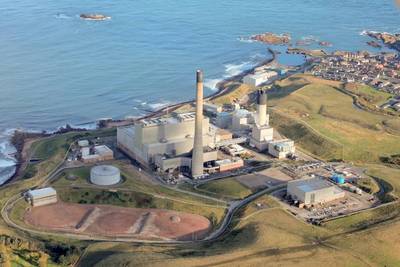 Shell has signed an agreement with the U.K. Government to progress the Peterhead Carbon Capture and Storage (CCS) project to the next phase of design.

The project, led by Shell, with strategic support from SSE, owners of the Peterhead gas power station in Aberdeenshire, aims to capture10 million metric tons of CO2 over 10 years. This will generate enough clean electricity to power the equivalent of 500,000 homes a year. If successful, the project will represent the first industrial-scale application of CCS technology at a gas power station anywhere in the world.

”The signing of this agreement is a hugely important step towards the U.K. delivering the world’s first CCS demonstration facility on a gas-fired power station. The project has the potential to make gas, already the cleanest burning fossil fuel, even cleaner,” said Ed Daniels, Chairman of Shell U.K. “CCS could be critical to reducing carbon emissions at a time of growing global demand for energy. The successful demonstration of the technology at Peterhead would be a step towards proving its commercial viability as a tool for mitigating climate change. It could also help diversify the North Sea oil and gas industry and so contribute to the sector’s long-term commercial health.”

“SSE is proud to be working with Shell on proposals to install this cutting-edge technology at our Peterhead plant,” said Paul Smith, Managing Director, Generation, SSE. “CCS could play a major role in ensuring secure, low carbon energy in the future and we are pleased to be playing our part in its development"

The proposed initiative at Peterhead is part of a portfolio of major CCS projects supported by Shell. Others include the Quest oil sands project in Alberta, Canada, and the Gorgon project in Australia.

The agreement signed by Ed Davey, Secretary of State for Energy and Climate Change, at Shell’s offices in Aberdeen today, marks the start of a period of Front-End Engineering and Design (FEED), which is expected to continue until 2015. Subject to positive final investment decisions by Shell and the UK Government and the receipt of all relevant consents and permits, the project is expected to be up and running by the end of the decade.