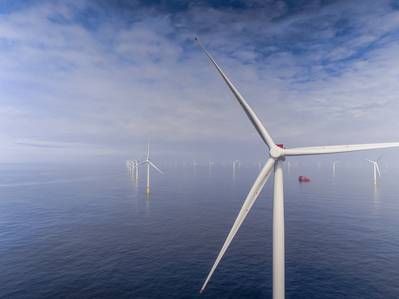 Wind turbine maker Siemens Gamesa and Dutch marine contractor Van Oord said on Friday they have won a contract worth more than 500 million euros ($580 million) to build a large wind farm in the Netherlands.

The 380 megawatt (MW) wind farm on IJsselmeer lake is expected to provide enough energy to power around 380,000 households from mid 2021.

Spain's Siemens Gamesa will design and supply 89 wind turbines and service the wind farm for at least 16 years. Van Oord will deliver foundations and cables for the project, with construction set to start next year.

The Netherlands is looking to increase renewable energy production and cut its greenhouse gas emissions by 49 percent by 2030.

Wind, solar, biomass and other sustainable sources should provide at least 16 percent of the country's energy requirements by 2023, up from 6.6 percent last year.

Plans call for wind farms with a total capacity of 3500 MW in the Dutch part of the North Sea by 2023, while turbines on and near land will also be significantly increased.