In early spring 2021 Storm Geomatics were approached to carry out topographic and bathymetric surveys on the River Aire, at the village of Newlay, northwest of Leeds, Yorkshire in the UK.

In the extremely shallow river the system supplied by Thurn Group, compromising of the Ocean alpha SL40 Unmanned Survey Vessel (USV) equipped with a Geoswath4 Interferometic Sonar and SBG Ekinox IMU, enabled Storm Geomatics to carry out a full bathymetric survey efficiently and safely in a difficult to access and fast-flowing section of the river Aire.

The 250m stretch of the River Aire surveyed comprised of Newlay Weir, the riverbanks, foreshore, and flood defenses and was surveyed with no issues due to the USV’s shallow draft and the Geoswath interferometric sonar’s wide swath, which was able to efficiently survey the river bank-to-bank.

A topographic survey was also completed to establish the geometry of the riverbank, foreshore, flood embankments, walls and ground behind the defences.  For this part of the work Storm used a combination of the SL40 USV and traditional survey techniques, with a total station capturing a 2m grid and the use of a Trimble SX10 laser scanner.  The overlapping parts of the manual and USV surveys were then cross-checked in GIS.
The results of the 250m long river survey were combined to form a 3D model, drawings, and a hydraulic model in Flood Modeller Pro. This geospatial data delivery informed the engineer of the current topography and conditions at the weir and the model was used to calculate water levels and flow at different rainfall return periods. 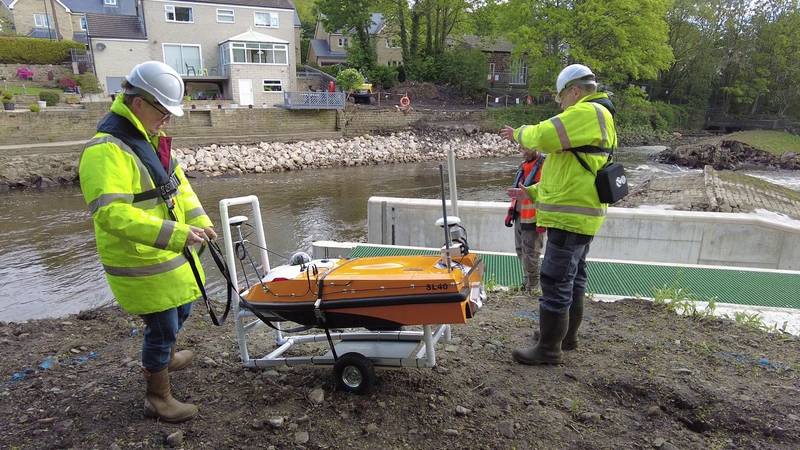