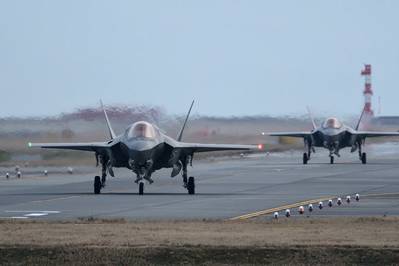 Japan expanded its search for a missing F-35 stealth fighter on  with a maritime survey vessel joining a navy ship and a U.S. Navy salvage team is expected in the area in coming days, a Japanese air force spokesman said.

Only small pieces of the Japanese Air Self Defense Force aircraft's tail have been found since the advanced jet disappeared from radar screens during an exercise with three other F-35s over the Pacific, near northwest Japan, on April 9.

"The plane and the pilot are still missing," the air force spokesman said. Investigators have been unable to unravel the fate of the lost aircraft, he added.

The U.S. Navy salvage crew will arrive aboard a commercial dive support and construction vessel, the DSCV Van Gogh, to help search an area of about 5,000 square nautical miles (17,150 square km), the U.S. Seventh Fleet said in a release.

Japanese coastguard vessels are warning other ships to keep out of the search area, which is within international waters, the air force spokesman said.

"There is always a concern I think if you put one of your most advanced technological pieces of gear, lose it like this F-35, that someone could go get it," a senior U.S. Navy official said at a background briefing this week when asked if he had any concern that China or Russia might want to find the plane.

"I'm pretty confident the Japanese won't allow that to occur," he said.

Investigators may need to recover the aircraft's flight data recorder to find what happened to the $126 million jet.

In the meantime, they have examined the missing pilot's medical records and questioned his colleagues about his mental state as part of their investigation, the spokesman said.

The Lockheed Martin plane, which was less than a year old, was the first F-35 assembled in Japan by Mitsubishi Heavy Industries.

It was aloft for only 28 minutes before disappearing without warning and had logged a total of 280 hours in the air.