Dive Teams Depend on Detection Devices 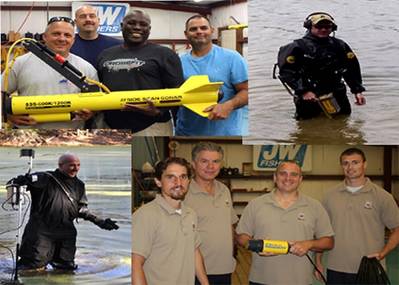 When a New York man accidentally fell from a concrete ledge into the Genesee River, the Rochester Police dive team was immediately dispatched. The incident commander made the decision to deploy a SCAN-650 scanning sonar recently acquired from JW Fishers. The sonar transmits a sound wave that sweeps a circle up to 200 feet in diameter. The wave bounces off any object on the bottom and the return signal is sent topside where it produces an image on a laptop computer showing the operator exactly what’s down there, regardless of water clarity. Officer Paul Romano reported, “We set up the SCAN-650 and found a target relatively quickly. A diver was splashed and confirmed it was the victim. The sonar was instrumental in helping make a fast recovery.”
Another sonar being used by many teams including the Alaska State Troopers, Louisville Fire Department in Kentucky and Bingham County Search and Rescue in Idaho is side scan. Instead of deploying the device from a stationary position like the SCAN-650, the side scan sonar is towed behind the boat and scans hundreds of feet of ocean, lake or river bottom with each pass of the vessel allowing a large area to be searched in a very short time. Encompassed within Bingham County is 26 square miles of water including the Snake River and the American Falls Reservoir. This summer proved to be an especially treacherous one on Idaho’s waterways with seven people drowning since Memorial Day. To assist in their recovery operations the county’s search and rescue group, in conjunction with the Bingham County Sheriff Department, recently acquired a JW Fishers SSS-600K side scan. This sonar will locate anything from a drowning victim to a sunken vessel. The image displayed on the topside computer looks as if the water has been removed and the operator is seeing everything on the bottom. In Alaska there are thousands of square miles of ocean surrounding the state, and many lakes and rivers scattered across its interior. Much of this water frozen for a good part of the year. Alaska State Troopers must have the ability to respond to a variety of emergencies whether it’s a vehicle going off the road into water, or a skimobile disappearing though the ice. The agency acquired both a SCAN-650 scanning sonar and the SSS-600K side scan for their varied call outs. The scanning sonar is easily deployed through a hole in the ice and scans a large diameter circle on the bottom, a task that would be dangerous and time consuming for divers. The towed side scan is employed when large areas of open water need to be searched. When a target appears on the computer screen, the operator simply clicks the mouse on the object and the GPS position is displayed, making it easy to relocate and recover the target.
In Missouri, the Highway Patrol handles more water-related incidents than any other agency, with a dive team conducting an average of 55 underwater operations each year to recover the victims of drowning and boating accidents or to retrieve evidence for criminal cases, JW Fishers said. Team members utilize underwater metal detectors, remote operated vehicles, sonars and underwater video systems to help locate and photograph evidence. Included in their equipment locker is a JW Fishers SeaOtter-2 ROV, a TOV-1 towed video system and a Pulse 8X metal detector which is an essential tool for locating evidence disposed of in a waterway. Many criminals mistakenly believe if they dispose of gun or knife in a waterway, it will be lost forever. But police divers routinely prove them wrong by finding weapons, shell casings, stolen objects and explosive devices with the Pulse 8X.
Two other groups that have discovered the effectiveness of underwater metal detectors are North Carolina’s REDS Team, a nonprofit group consisting of rescue, extrication and delivery specialists, and the Washtenaw County Sheriff’s Office Dive Team. David Pease, chief of the REDS Team, said their JW Fishers Pulse 6X detector helped locate a gun for their local police department. Washtenaw dive team member Sgt. Paul Cook reports, “We have used the Pulse 8X with excellent success locating many evidentiary items including spent cartridge casings, weapons, and property. It’s a valuable piece of our kit and we’d be lost without it.”
• Alaska • explosive devices • Highway Patrol
Email