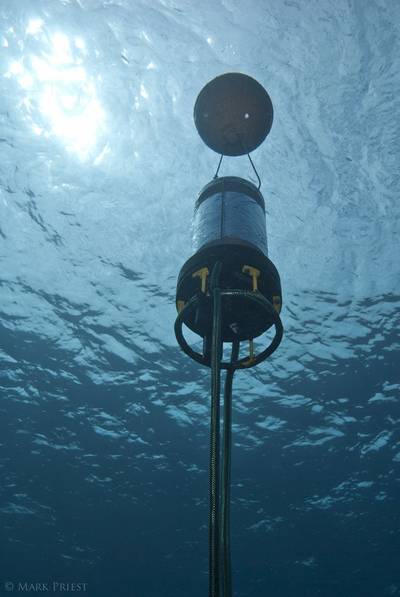 Through the acquisition of VEMCO and HTI, Innovasea has become a pioneer in acoustic telemetry to aid researchers worldwide in their quest to understand aquatic animal behavior. The vastness and complexity of the ocean, combined with the nearly constant motion of many species, make this an incredibly challenging task. However, Innovasea is providing critical tools to monitor fish and marine mammal behavior, movements and habitat to enable better decisions surrounding management and conservation.

One of the pillars of this technology is Innovasea’s VR4 UWM (Underwater Modem), which is used for tracking and recording tagged fish populations. The VR4 is a submersible receiver capable of identifying all Innovasea coded transmitters and communicating that data remotely to a surface modem on demand. The subsea acoustic communications are conducted via a fully integrated OEM version of Teledyne Benthos CM-903 Compact Modem. Teledyne says its acoustic modems are suited for this application due to their robust communication schemes, low power consumption, and proven dependability in a wide array of challenging environments.

“Our advanced VR4 Underwater Modem receiver is an extraordinary tool for researchers tracking fish and other aquatic animals because of its reliability and the fact its batteries last for up to 10 years in the water,” said Mark Jollymore, president of Innovasea. "By integrating Teledyne’s innovative and durable acoustic modem technology, we know our customers will be able to count on the VR4 to deliver important data day after day – no matter the conditions.”

The topside acoustic modems can be carried by ships operated by personnel at sea, but the technology increasingly lends itself to autonomous vehicles such as the Liquid Robotics (Boeing) Wave Glider or Slocum underwater gliders from Teledyne Marine. These vehicles can be preprogrammed to fly past the known receiver locations and allow the seabed devices to upload the data every few months – more frequently than ship-led download operations and at a much lower cost.

Innovasea has purchased a significant number of Teledyne modems over the past 10 years to support various fish and marine tracking programs. The modems installed on VR4 systems have been utilized to support the Ocean Tracking Network (OTN)—an aquatic research platform that connects universities, businesses, not-for-profit organizations, and governments to track animal movements on a global scale. The OTN’s Pacific Ocean acoustic receiver arrays in the Queen Charlotte Strait, Juan de Fuca Strait, and the Northern Strait of Georgia span from Vancouver Island to the mainland, provide an integrated series of regional gates to document the coastal movements of acoustically tagged juvenile salmon migrating to sea, adult salmon returning from the sea to rivers in the region to spawn, and other coastal species’ movements.

Oceanology International 2020, held this year as a virtual event from 1st to 4th December on the custom-built, AI-driven…