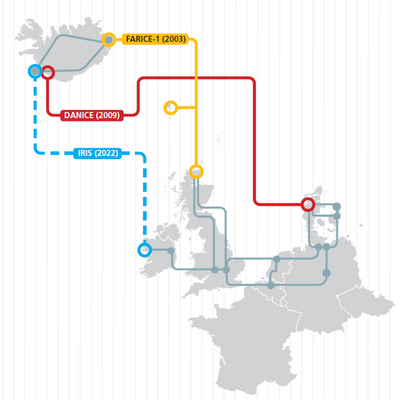 SubCom and Farice ehf today announced that a contract is in force to supply and install the cable system, which is expected to be ready for service by the end of 2022.

Farice is an international connectivity provider fully owned by the Icelandic Government which currently owns and operates two submarine cable systems that connect Iceland to Europe – FARICE-1 and DANICE. The third cable system will be called IRIS.

Designed as a six-fiber pair trunk with a total system capacity of 108 Tbps with each fiber pair delivering 18Tbs, IRIS will be approximately 1,700 km in length and connect south west of Iceland to Ballyloughane Strand in Galway, Ireland.

Farice has already finalized the DTS and marine survey work on Ireland’s continental shelf and will complete the remaining survey works to Iceland in 2021. Manufacture of the cable and equipment will take place at SubCom’s manufacturing headquarters in Newington, N.H., during 2021 and early 2022, with main lay installation operations scheduled for summer 2022.

Thorvardur Sveinsson, CEO of Farice, described the IRIS undersea cable system as “an essential step for both the safety and security of Iceland.”

Farice opted to land the IRIS cable in Ireland, a nexus of trans-Atlantic connections and a center of European operations for many international businesses. IRIS will directly connect to a new high-speed undersea cable system that will enable more diverse, secure, high-speed connectivity between Iceland and mainland Europe.