Workboat Operational 363 Days in a Year 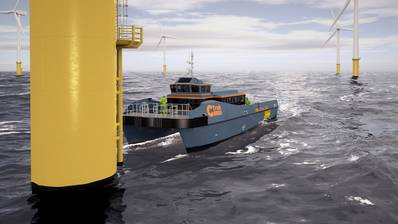 Peter Jørgensen, CWind managing director, commented “We are delighted to have achieved such a high level of performance with this vessel. She is a core part of the fleet at CWind, allowing our teams to efficiently undertake the varied and complex tasks demanded by the industry whilst also reducing their carbon footprint with the inherent fuel savings. Operators now know that they can rely on these composite workboats to deliver 24/7.”

This impeccable service record, coupled with the composite workboat’s innate fuel efficiency and multi-tasking ability, is pushing Essex-based builder CTruk to the forefront of vessel design in the sector.

Fuel consumption on the 18.5m WFSV is reported to be half that of smaller aluminium vessels performing the same technician transfer function. CWind Alliance burns only 130 litres of fuel per hour at service speed despite also carrying amphibious rescue vehicle, Avenger, on her aft deck. Measured comparisons made by charter company CWind have shown that their fleet of CTruk workboats are the lowest cost crew transfer vessels operating on the London Array, the world’s largest consented offshore wind farm.

CTruk entered the offshore wind support vessel sector in 2010 determined to improve on the current market offering. Choosing to build with resin-infusion composite was a key step for the ambitious team, with the resulting weight-saving and optimised hydrodynamics ensuring that these vessels quickly became a familiar sight on offshore wind farms around the UK.