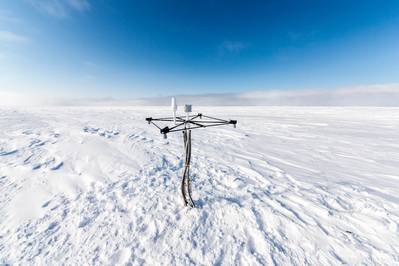 MetOcean is pleased to announce the release of the innovative Snow Beacon.

Dr. Marcel Nicolaus, Climate Sciences | Sea Ice Physics at the Alfred Wegener Institute , stated “Snow depth on sea ice is one of the most important parameters for sea ice research, and more generally for understanding the climate system in polar regions. Most of the sea ice is covered with snow for most of the year. And the depth of snow and its physical properties determine the sea ice mass- and energy balance. Most prominent examples are surface albedo, ice growth and melt, formation of melt ponds on sea ice, and light transmission into the ice and ocean. But at the same time, snow depth is one of the greatest unknowns. In order to gather much more high quality seasonal data sets of snow depth from both, Arctic and Antarctic, sea ice, the development of the new snow depth beacon is an important step for us. Aiming for a specialized, but really affordable beacon will hopefully allow us to learn much more about snow on sea ice and its seasonality and processes in the coming years. We hope to deploy many of those beacons in international efforts to create a comprehensive data set on snow depth also from very remote polar regions. Such data will also be a great contribution to satellite data and numerical model validation and improvements.”

Clifton Flint, MetOcean Technical Sales, stated “I am pleased to have had the opportunity to work with AWI and to be able to bring the Snow Beacon, the first of this kind, to the scientific community.  We look forward to future opportunities to work with those scientist and researches whose primary focus is to understand the impact that accumulating snow has on our constantly changing polar and arctic climates.”

Underwater Noise is a Threat to Marine Life

Oceans are full of sound. Waves, earthquakes and calving icebergs all contribute to the underwater soundscape. But so do human activities…