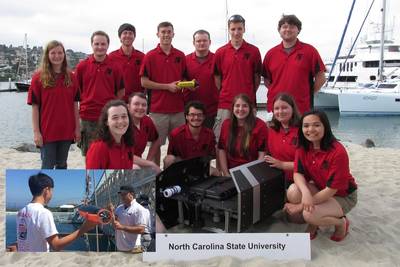 The Robosub competition began 18 years ago to advance the development of Autonomous Underwater Vehicles (AUV). Cosponsored by the Association of Unmanned Vehicle Systems International (AUVSI) and the U.S. Office of Naval Research (ONR), the competition’s goal is to challenge a new generation of engineers to accomplish realistic missions in an underwater environment and get young people excited about careers in science, technology, engineering and math (STEM). The hope is that Robosub will inspire these young men and women to pursue STEM careers, and create opportunities to enter the rapidly expanding field of maritime robotics.
This annual event draws teams from high schools, colleges and universities from around the world as participants learn how to work together to create an autonomous system that will accomplish a variety of challenging tasks. The underwater vehicles they construct must navigate a complex course which involves visual and acoustic sensing elements, small and large object manipulation, dropping markers into specific bins and launching torpedoes at particular targets; all without human control or intervention. Points are awarded for the number and difficulty of the tasks successfully completed.
One returning competitor is North Carolina State University Underwater Robotics Club, a student run organization that designs and builds autonomous submersibles. Their vehicle Seawolf was designed to be capable of maneuvering through an underwater obstacle course, retrieving and dropping payloads and navigating to locations marked by an acoustic pinger.  To test their vehicle’s ability to maneuver to an acoustic beacon, the team needed a pinger for trials. They choose JW Fishers SFP-1 single frequency pinger for its low cost, and because its specifications met the Robosub requirements. The SFP-1 transmits a preset frequency between 22 and 37.5 kHz which can be detected at a distance of several thousand feet.
A newcomer to Robosub is the SASAUV team from Shanghai American School, an international high school based in China. Their group is divided into three parts, each responsible for different tasks; navigation and software, hardware and multimedia. At a time when many modern AUVs are exploring new and sometimes radical exterior designs, their design philosophy is the underwater vehicle should have the shape of a conventional submarine. To accelerate the development of the AUV’s acoustic sensing capability, the team used parts of JW Fishers PR-1 pinger receiver, a device that finds acoustic pingers and guides the operator to the pinger’s location. Team captain Kylin Daniel reported, “The equipment JW Fishers supplied was absolutely phenomenal to work with, and we plan on using additional equipment from Fishers next year.” He went to say, “Although we were unable to accomplish all of the required tasks, our team still managed to score more points that many notable college teams. This project has given us high schoolers an incredible experience, and we look forward to competing again in the future.”
Other teams using Fishers acoustic devices to help design their AUVs for Robosub are from Kasetsart University in Thailand, University of Colorado Boulder, National University of Singapore and India’s Underwater Robotics Society. Other educational institutions using Fishers pingers in their projects are the University of Delaware, University of Texas Austin, University of South Florida, Texas A&M, Lester B. Pearson College, Inha University in China, Coastal Carolina University, Louisiana State University and Pukyong National University in Korea.
• acoustic devices • Colorado • Delaware