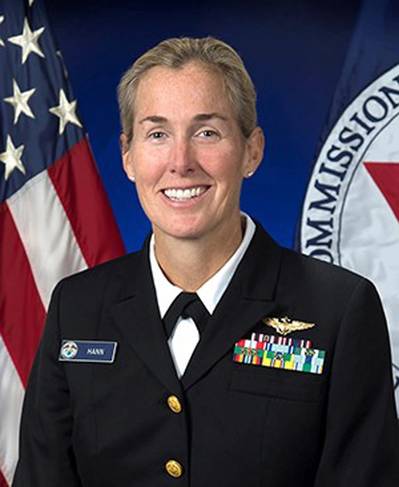 “From flying into hurricanes to crewing remote explorations to the deepest depths of the ocean, the NOAA Corps drives NOAA’s science forward,” said U.S. Secretary of Commerce Gina M. Raimondo. “Rear Admiral Hann’s leadership will continue to advance how we understand our planet through key observational platforms.”

As director of OMAO and the NOAA Corps, Rear Admiral Hann will be responsible for NOAA’s fleet of 15 research and survey ships, nine aircraft, and the uncrewed systems operations program, as well as guiding the approximately 330 uniformed officers and 1,000 civilian personnel assigned to OMAO and the NOAA Corps.

“Rear Admiral Hann is a highly qualified and capable leader with an impressive record of achievement,” said Richard Spinrad, Ph.D., NOAA administrator. “She will play a vital role in ensuring the readiness and efficient operation of the NOAA fleet, which is a critical part of the nation’s environmental observation infrastructure.”

Hann has served in many operational and management assignments during her NOAA career, most recently as OMAO’s deputy director for operations and deputy director of the NOAA Corps. Hann has served aboard NOAA aircraft as both a pilot and flight meteorologist, and has supported a variety of scientific missions and multiple uncrewed aircraft missions as a pilot and project manager. Hann has also served aboard NOAA ships Miller Freeman and Townsend Cromwell, supporting fisheries surveys and oceanographic research in the Pacific.