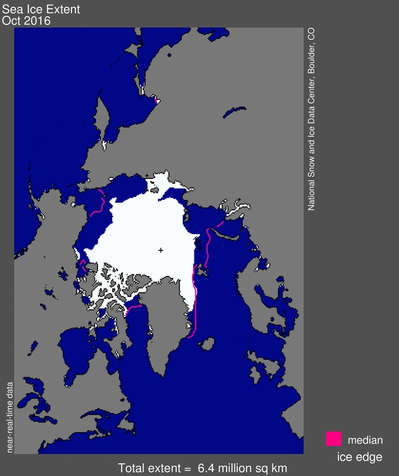 Drive your car 4,000 km (2,500 miles) and its greenhouse gas emissions will melt three square metres (32 square feet) of ice on the Arctic Ocean, according to a study on Thursday that found a direct link between carbon dioxide and the shrinking ice.
Examining long-term trends for ice floating on the ocean since the 1950s, scientists in Germany and the United States projected the ocean around the North Pole would be ice-free in summers by the mid-2040s at current levels of emissions.
In the historical records, they found that every tonne of carbon dioxide emitted to the atmosphere meant on average the loss of three square metres of ice in September, when the ice reaches a minimum extent before expanding in winter.
That made it possible to "grasp the contribution of personal carbon dioxide emissions to the loss of Arctic sea ice," scientists at Germany's Max Planck Institute for Meteorology and the U.S. National Snow and Ice Data Center wrote in the journal Science.
Each passenger taking a return flight from New York to Europe, or driving a gasoline car 4,000 kms, would emit about a tonne of carbon dioxide, they estimated.
A long-term retreat of Arctic sea ice is already causing profound changes, disrupting the lives of indigenous peoples while opening the region to more oil and gas exploration and shipping.
Scientists usually deal in more abstract terms such as billions of tonnes of greenhouse gases. "Here it's more personal," lead author Dirk Notz of the Max Planck Institute told Reuters.
Some other scientists said the study was simplistic.
"This sounds like a rather crude equation," Peter Wadhams, a professor of ocean physics at Cambridge University, told Reuters.
He said ice could disappear from the Arctic Ocean as early as 2017 or 2018 because of other factors triggered by man-made climate change, such as shifts in winds and rising sea temperatures.
In September 2016, sea ice shrank to an annual minimum extent of 4.14 million square kilometres (1.60 million square miles), matching 2007 as the second smallest in the satellite record behind 2012.
Thursday's study said goals set under the 2015 Paris Agreement for curbing emissions were insufficient to avert the loss of ice. Governments meet in Marrakesh, Morocco, from Nov. 7-18 to work out how to implement the agreement.

The Florida Current, which forms the start of the Gulf Stream, has slowed over the past century and is the slowest it has…