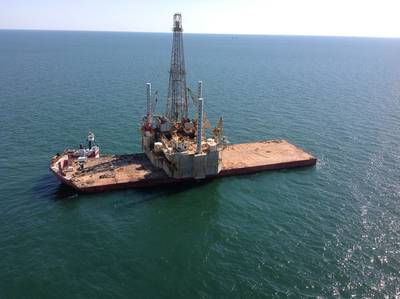 In mid-December 2012 a retired jack-up drill rig under tow from Fourchon, LA to be dismantled in Texas began taking on water. Despite being in the crowded waters of the oilfield, the tow captain was able to maneuver the sinking rig into a little used section of the Vermillion Block where the seas finally washed over the main deck and forced the rig to the ocean floor.

Inland Salvage Incorporated (ISI), based in Harvey, LA, was awarded the salvage contract and began dedicating assets towards the effort, teaming up with Titan Salvage of Pompano Beach Fl. Titan's naval architects began performing stability calculations while ISI and Titan personnel mobilized to the wreck site onboard a 185 class lift boat which could remain on location even during the Gulf's winter storms.

The Salvage Master, Gordon Olson, determined it would be best to approach the salvage from two fronts. One dive team would work to restore buoyancy to the barge and mud mat, while the second team would attempt to reestablish control of the now submerged jacking system.  Salvage Engineers developed an external hydraulic supply and control unit that was connected to the existing jacking system by divers working in the confined spaces of the rig. At the same time, divers penetrated into the barge tanks to install salvage pumps and restore the rig's dewatering system for the mud mat.

With the work complete and a break in the weather, the process of raising the barge using its own jacking system began. The hydraulic repairs were successful and the barge slowly moved up the rig's legs. As the main deck broke the waters surface, the salvors began pumping the barge to lessen the load on the hydraulic jacks, which continued until the barge was completely jacked up out of the water.

It was decided to set the jack up onto a receiver barge that could safely survive the trip to the scrap yard. The rig was jacked high enough above the water to allow an ocean going receiver barge to be floated underneath of it. Once the floating vessel was in position, the jacks began lowering the rig onto the receiver deck. The rig's mud mat was then raised up under the receiver barge and the tow was underway. The barge and rig combination safely arrived at its destination where the process was reversed and the jack up rig successfully delivered.