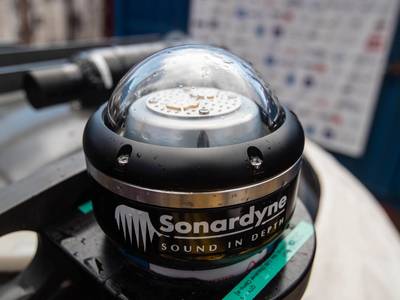 BlueComm is the only commercial-off-the-shelf (COTS) technology that enables wireless transmission of high bandwidth tactical data, including video, over ranges of a few tens or even hundreds of meters, at rates of up to 10 megabits per second.

With it, forces can vastly increase the communications capability of their underwater systems to drive faster, safer and better-informed decision making in theaters of operation. It could be considered for use with swarms of autonomous vehicles mapping areas for mine-like objects, for USVs acting as surface communication gateways or as part of emerging MAS networks.

Because they use light to transmit and receive data instead of the acoustics traditionally used for communications underwater, BlueComm modems can deliver higher data rates with lower latency. They’re also undetectable by sonar listening devices, making them highly suitable for covert, secure communications. Configurations are available for all operating environments, including shallow waters with high levels of ambient light, and installation on underwater vehicles equipped with powerful lighting.

For DST, the objective of the acquisition is to understand the operational implications of optical data transmission and its dependence on water clarity, geometry and ambient illumination.

DST is the Australian government's lead agency responsible for applying science and technology to safeguard Australia and its national interests, delivering expert, impartial advice and innovative solutions for defense and national security.

Ioseba Tena, Global Business Manager – Defence – at Sonardyne, says, “BlueComm is a game changer for underwater operations, enabling autonomous and unmanned underwater vehicles (AUV/UUVs) and unmanned and manned vessels to communicate, without compromising their position. As we envision new concepts of operation which require interaction between different off-board assets subsea, the ability to share data covertly and securely cannot be underestimated.”