Autonomy: Sun, Sail & Subsea – Not a Holiday, but a Hybrid UxV Platform

Ten years ago, Ocean Aero’s unique hybrid sailboat-submarine was a novel idea being developed in a San Diego garage. Today, the company has a growing fleet of vehicles on the water and a $14 million funding injection to take it the next level. Elaine Maslin reports.

Earlier this year, a great illustration of the ongoing adoption of marine autonomous systems was made through the International Maritime Exercise (IMX) 2022, a US-led training event involving 60 partner nations and international organizations. The event, held in the Middle East, was hailed as the largest unmanned exercise in the world with more than 80 unmanned/uncrewed systems (UxV) from 10 nations participating.

Most are designed for one mode of operation (e.g. subsea or surface). However, one has been designed to do both. It’s Ocean Aero’s Triton, a hybrid wind and solar powered vehicle that can operate on and down to 200 m beneath the waves.

“It’s the only platform that both sails and dives which unlocks an incredible value proposition to customers in our target sectors,” says Kevin Decker, Ocean Aero’s CEO. “The versatility of having two modes of operation is very attractive to our clients. They’re able to perform twice the number of mission types for their work, be it in offshore energy, defense, or science markets,” Keith Blystone, Ocean Aero’s Chief of Staff, adds.
Ocean Aero’s commercial offering is the Triton, a 4.4 m-long vehicle with a 3 m-high retractable wing sail and 1.5 m-deep keel. It has 200W solar panels embedded on the hull and a 4kWh lithium-ion battery to support underwater operations. On the surface, it operates as a sail boat, using wind for forward propulsion while charging its batteries. If there’s bad weather, above sea state 5 for example, or it wants to avoid detection or gather data, it can then fold together and retract its wing sail into the hull and flood the hull to dive. Underwater, it has a ballast system to support dives down to 200 m.

It can also use a dynamic buoyancy system to loiter or operate something like a glider, and/or its dual thrusters to navigate at up to 2kts. To return to sail mode, it returns to the surface, where a bilge pump type system pumps out the flooded hull to return it to a sail boat.
On the surface, they can run for months and months, says Blystone. “We’d typically recommend bringing them in every 90 days for routine maintenance and get marine growth off of it,” he says. “Underwater, it can last days, depending on the payload, and up to eight days in ‘dark mode’.” 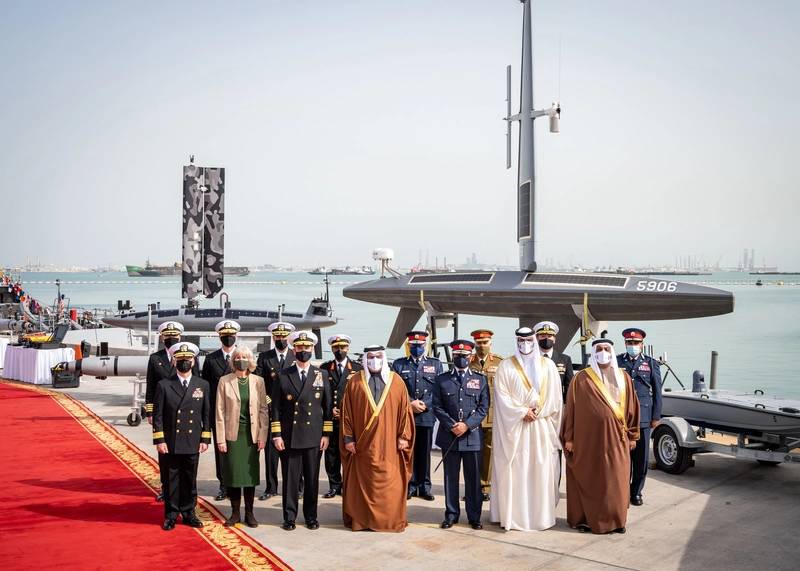 An idea developed in San Diego

The concept dates back to 2012, when Ocean Aero’s founders got together in San Diego, California. Their first generation vehicle caught the eye of Teledyne, which invested in the company in 2014. By the end of 2015, further prototypes were built and they caught the interest of Lockheed Martin, which initially partnered with Ocean Aero on a multi-domain UxV demonstration in 2016, before also becoming an investor in 2017.

The initial design was to support extended autonomous ocean observation and data collection, initially down to 10 m water depth, where it could remain to avoid bad weather or detection, targeting the scientific community. In 2018, true to this goal, the first Submaran (it’s initial name) mission saw it sampling seawater for harmful algal bloom (HAB) cells and toxins off Washington, as part of a pilot project. In 2020, this led to a full project, with the University of Washington’s Applied Physics Laboratory and other partners using National Oceanic and Atmospheric Administration funding to improve early detection and modelling of these potentially harmful cells and toxins, reaching offshore areas using an autonomous vehicle in weather conditions too extreme for small boats. That year, the firm was also made a major step into the defence market, winning a contract to deliver six of its vehicles to the U.S. Department of Homeland Security.

There’s been a lot of work across a number of areas to get to where the company is today. “There are a lot of components on surface sailing vessels that work perfectly, such as an anemometer,” says Decker. “But these aren’t designed to go to 200 m beneath the surface, at that pressure, and come back up and keep on working. Underwater marinizing of every component of a sail boat is actually a little tougher than you would think. Also, people don’t always think about the enormous amount of software and autonomy that’s required to have all these different systems work together and communicate back and forth with each other.” The work that’s been done in this space means Triton can run missions based on pre-programmed waypoints, with programmable parameters such as exclusion zones, with the vehicle using algorithms developed by the company to determine the fastest route to those waypoints.

Jordon Cousino, Chief Commercial Officer, at Ocean Aero, adds that, while there’s a payload eco-system for uncrewed surface vessels (USVs), driven largely around Wave Gliders, and a payload eco-system created around AUVs, these eco-systems rarely break that water line in either direction. “So we’ve had to underwater marinize the USV payloads and the reverse on the AUV payloads. It’s a very complex eco-system that we live in. It’s literally a sailboat that’s a submarine and the complexities that come with that are challenging.” “The ability to push the envelope with battery technology, solar panel technology, and power management is also something we’ve also had to get good at pretty quickly,” adds Decker.
They’ve also learned to simplify as much as they can. “We utilise a dual-element wing on the sail that had probably 20 feet of cable that wrapped around numerous pulley systems and when you start putting these out for long endurance missions, we would start to see these smaller stainless steel cables either bust or break at certain points,” explains Cousino. “So we focused on creating a ruggedized vehicle for long-endurance missions, where we went to a single element wing that has 77 fewer parts and tried to simplify the engineering as much as possible to allow for persistent operations without failure points.”

“One of the things we’re proud of is user friendliness, the ability to launch and recover,” adds Blystone. “We’ve put a lot of focus on making it easy to launch and recover using just one to two people in a matter of minutes. It has a single pick point that allows you to lift it and place it in the water easily if you’re using a davit lift system off another vessel or shore side. Because it’s a submarine and there’s oil in the boat to naturally balance it, when you go to pick it up it naturally balances itself. It’s little things that make the process easier. But you literally can also go push this in from a shore side.” 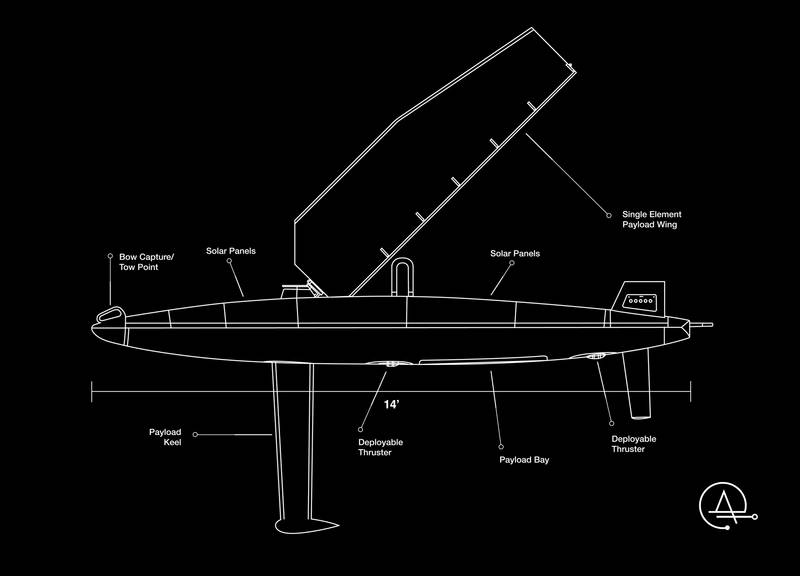 Triton out in the wild

The result of this work is a platform that’s now in the hands of the Department of Homeland Security and the University of Washington, as well as the US Navy, another US agency, and a number of other organisations. “There are three big markets we’re focused on, the defence community, the scientific community, and the offshore energy community, predominantly offshore oil and gas but also offshore wind. We’re active in those three markets,” says Blystone. “We have active deployments or programmes in all of those three markets, with customers either owning systems or paying us to operate them with applications varying from monitoring marine life to asset inspection,” he says.

A large current focus is on sensor and payload integration, working with other organisations. “What you do with the boat is really the most important thing. We’ve been really focusing our engineering efforts on making sure we have fantastic payload integrations, fantastic sensor integrations and partnerships as we move forward. Ultimately whatever payload and sensor packages the customer wants should be able to be incorporated into the Triton.” says Blystone.

There’s more the company wants to do, however. “Today, we can use many of our Tritons together on a mission,” says Blystone. “In the future we’ll continue developing more advanced AI/ML algorithms in support of true swarming and cross-platform coordination.”

All this is being done under quite a new staff and management team at Ocean Aero, most of whom have come in over the last 16-20 months to take the company forward as a commercial enterprise. A big part of that was a series C fund raise last year, which netted the company $14 million. To underpin its growth, the company has also moved from San Diego to the Port of Gulfport, Mississippi, where it will again move into a 63,000 sq ft facility by the end of this year. It’s also staffing up. Decker says they had 17 staff in early summer last year and are looking to have increased that to 60 full time staff by the end of March. It has also built up an advisory board which includes a number of two- to four-star admirals and an impressive roster of technical specialists who’re active in the advocacy of the group, adds Decker.

As Ocean Aero moves into a new commercial gear, some of its original founders are back doing what they do; working on new ideas. Co-founders Vance McClure and Mark Ott, who was CTO until 2016, have moved on, with Ott now a founding partner at SubSeaSail, along with partner Chris Todter, who was also at Ocean Aero. Another former member of the Ocean Aero crew is Ken Childress, who is now at AUV and data firm Terradepth.