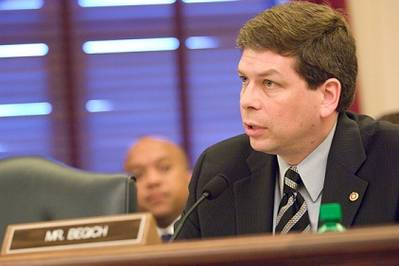 Begich is chairman of the Senate Subcommittee on Oceans, Atmosphere, Fisheries and Coast Guard. Wicker and Schatz serve on the subcommittee as well.

The NOAA Corps’ primary mission is to operate NOAA’s fleet of research ships and aircraft. They conduct hydrographic surveys, which are key to domestic commerce. The ships NOAA operates provide fishery managers the data the need to keep fish stocks healthy and coastal communities prosperous. In addition, NOAA officers fly the agency’s “Hurricane Hunter” aircraft, which gather the data needed to forecast hurricane landfalls in conjunction with a Mississippi-based Air Force weather squadron. During Hurricane Sandy, the NOAA Corps was instrumental in improving the hurricane track forecast and quickly surveying and reopening the ports to relief supplies and commerce.

“From maritime activities and resource development to fisheries and commercial transportation, oceans are key to Alaska’s economic prosperity,” Begich said. “We rely on the NOAA Corps to chart shipping routes, survey fish populations and conduct scientific research. To be successful, we need to attract the best and brightest young men and women to the Corps and ensure that we retain knowledgeable senior officers – this bill will let us do just that.”

“The NOAA Officer Corps is an integral member of our nation’s uniformed services,” Wicker said. “This legislation will aid the Corps’ mission by providing new tools for recruitment and retention and enable the Corps to conduct their research missions more effectively. Mississippi has a proud tradition of supporting the NOAA Officer Corps, particularly our NOAA port office in Pascagoula. I am pleased to join Senator Begich in this bipartisan effort to strengthen and institute commonsense reforms to the NOAA Officer Corps.”

“I join my colleagues to salute the men and women of the NOAA Corps with a bill that recognizes their contributions to our home states and the nation by putting them on equal footing with other men and women in uniform,” said Senator Brian Schatz. “I am grateful for their service to Hawaii in particular, where they provide critical support to forecast weather, manage our fisheries, and preserve the unique character of our World Heritage site, the Papahanaumokuakea Marine National Monument.”

The NOAA Corps Amendments Act of 2013 would improve the Corps’ diversity by creating incentive programs to draw students with a science or engineering background, balance the demands of senior officers with families by authorizing unpaid sabbatical for officers so they can leave the service for a few years to start a family and return at the rank they achieved before leaving (NOAA ships usually deploy for 9-10 months a year, making family life challenging for NOAA officers.), limit spending increases on new education programs to savings the bill generates elsewhere and add the authority to require a period of obligated service after initial training to strengthen retention of officers and save taxpayer dollars.