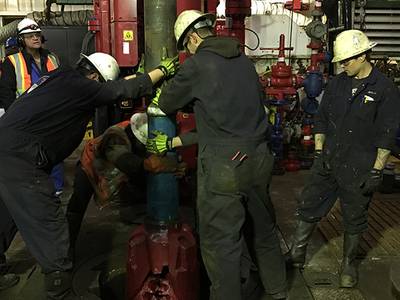 Italian oil producer Eni this week began drilling a new well in U.S. waters off the north coast of Alaska, becoming the first company to do so since 2015, federal regulators said on Wednesday.
The oil and gas firm is working from an artificial island in the Beaufort Sea about three miles off Oliktok Point in the Arctic Ocean. The well is expected to run more than 6 miles (10 km) long.
The project could result in 20,000 barrels a day of oil production, according to regulator U.S. Bureau of Safety and Environmental Enforcement (BSEE), which said it sent employees to the site to ensure compliance with federal regulations and safety standards.
Eni, which has existing production facilities on the island and at Oliktok Point, did not immediately reply to requests for comment.
According to BSEE, Eni plans to use extended-reach drilling techniques to tap a formation on the Outer Continental Shelf that regulators approved a year ago. Eni is exploring the formation in partnership with Royal Dutch Shell Plc. The companies plan to drill two exploration wells plus two potential sidetrack wells over the next two years, according to BSEE. Shell in 2015 abandoned its exploration activities in offshore Alaska, citing high costs and stringent regulations.
In April, U.S. President Donald Trump signed an executive order to extend offshore drilling to areas in the Arctic and other places that previously were off limits.
The decision was part of the Trump Administration's policy to maximize U.S. output of fossil fuels for domestic use and for exporting.