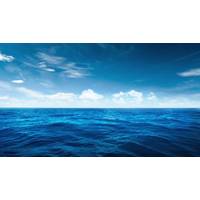 Queen Elizabeth presented broadcaster David Attenborough with an award on Wednesday for his hit television nature series Blue Planet II, which raised public awareness around the world of the danger of plastic pollution in oceans.Attenborough, who like the monarch is 93 years old, was awarded the Chatham House prize along with the BBC Studios Natural History Unit for "the galvanizing impact" of the series, the London-based international affairs think tank said.The annual prize honozrs people or organisations deemed to have made the most significant contribution to the improvement of internation 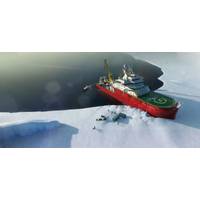 On Thursday, 26 September, the ceremonial naming of the new British polar research ship RRS Sir David Attenborough will take place at the Cammell Laird Birkenhead shipyard.The ship was commissioned by the UK’s Natural Environment Research Council, built by Cammell Laird, and operated by the British Antarctic Survey. This vessel is designed to transform how ship-borne science is conducted in the Polar Regions and its commissioning is part of a major UK Government polar infrastructure investment program aiming to keep Britain at the forefront of world-leading research in Antarctica and the Arctic. 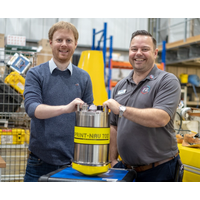 incorporated to provide tracking on the underside of the ice. A2KUI will also be equipped for acoustic tracking using Sonardyne’s Ranger 2 Ultra-Short BaseLine (USBL) system, which is fitted to the UK research vessels RRS James Cook, RRS Discovery and the new polar research vessel RRS Sir David Attenborough.”Dr Alex Phillips, Head of Marine Autonomous Systems Development, at the NOC, says, “The development of Autosub2KUI by the NOC builds on the successes of previous generations of Autosub, including Autosub3, which has previously penetrated up to 60km under the ice from the ice-edge 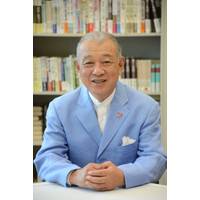 in pertinent research and areas. SOI offers at-sea exposure to scientists, students, and artists, sharing their research and experiences across multiple platforms. To date SOI has hosted more than 565 scientists and 216 students representing over 160 institutions from 27 countries.No. 8RRS Sir David AttenboroughAka “Boaty McBoatface”As the subsea industry collectively turns its attention to unmanned, autonomous vehicles to provide a consistency of presence and economy of scale that is unmatched by manned operations, MTR thought it appropriate to go ‘old school’ on number eight 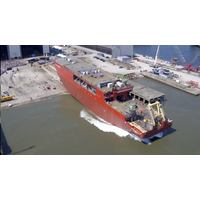 The hull of the U.K.’s new polar research ship RRS Sir David Attenborough was launched from Cammell Laird shipyard Saturday, marking a major milestone toward the completion of one of the world’s most advanced scientific maritime vessels.Shipyard workers, engineers, scientists and maritime industry experts were among thousands who gathered to celebrate the launch along with special guest speakers, including renowned naturalist and broadcaster Sir David Attenborough, who pressed the launch button together with British Antarctic Survey Director Professor Dame Jane Francis.Once in the River 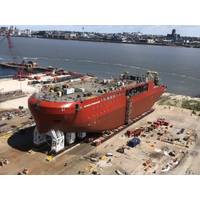 Naval architect and marine engineering firm Houlder has played a key role in the development of the U.K.’s new polar research vessel, RRS Sir David Attenborough, since it was first conceived by the British Antarctic Survey.CEO Rupert Hare will join members of the project team as hull number 1390, comprising 10,000t of steel, is launched at Cammell Laird Shipyard on July 14.As experts in ship construction, and ice class design in particular, Houlder worked with the British Antarctic Survey and the Natural Environment Research Council (NERC) initially through the vessel’s concept design and 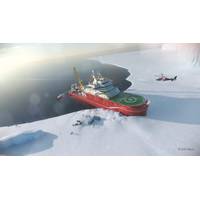 Research Vessels: The Fleet is In

A wave of new and innovative research vessels are set to help scientists enhance their understanding of the oceans. MTR profiles several of these ships currently in designe and construction across the globe.   RRS Sir David Attenborough The U.K.’s new polar research ship rose to fame when Boaty McBoatface took the internet by storm as the leading vote getter in an online naming contest. The U.K.’s Natural Environment Research Council (NERC) eventually chose to call the ship RRS Sir David Attenborough, a name better fit for a $256 million high-tech research ship (though the Boaty 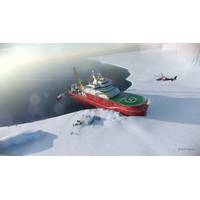 Rolls-Royce is marking another milestone on the journey toward the completion of Britain’s new polar research vessel the RRS Sir David Attenborough being built by Merseyside shipyard Cammell Laird.   The last of the vessel’s Bergen B33:45 engines/gensets have been craned into the ship’s hull at Cammell Laird ready to be connected to the RRS Sir David Attenborough’s Rolls-Royce propulsion system.   The nine cylinder engines are carefully installed in three separate pieces. The first part of the nine cylinder engine to be craned into place was its double resilient 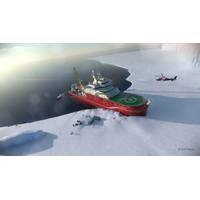 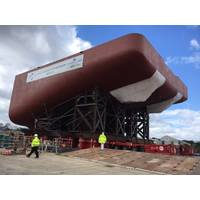 The stern section of Britain’s new polar research ship, RRS Sir David Attenborough, will be transported by barge this week from Hebburn-based shipyard A&P Tyne (Newcastle), part of A&P Group, to the Cammell Laird’s shipyard in Birkenhead.    The new ship is a major U.K. Government investment in frontier science. Commissioned by NERC, and built by the world famous marine engineering company Cammell Laird Shiprepairers & Shipbuilders Ltd. The vessel is a Rolls-Royce design, and will be operated by British Antarctic Survey when the ship enters service in 2019.   T