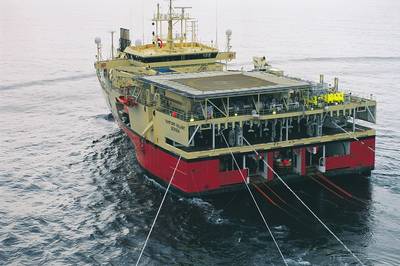 PGS, the world's largest seismic surveyor, called off a planned debt refinancing on Wednesday, citing worsening investor sentiment towards the oilfield services sector over the past weeks, sending the Norwegian company's shares down 24%.

Oslo-listed PGS, which owns a fleet of seismic vessels that scan the seabed for buried hydrocarbons and sells the data to oil and gas explorers, had announced plans on May 27 to raise debt of $675 million as part of a refinancing.

Brent crude oil prices have fallen by more than 10% since the company announced its refinancing plans.

"We see that the investor sentiment regarding oil services has been considerably weaker since we launched the refinancing plans at the end of May, and that has impacted the interest for the facilities negatively," PGS spokesman Baard Stenberg said.

One analyst said there were worries that the company would now have to refinance its debts by selling new shares instead.

"The reason for the sell-off is increased fears of a dilutive equity issue in relation to the refinancing, that is why the market reacts the way it does in our view," said Fearnley Securities analyst Haakon Omsted.

Based on the seismic market's outlook, however, the company should be able to raise funds without a forced equity issue, he said.

"Clearly this depends on PGS delivering as expected and reopening of capital markets," Omsted added.

PGS said it was not currently contemplating a share issue.

"We will of course evaluate all possible structures, but at the moment we don't consider conducting a share issue as part of a future refinancing," PGS spokesman Stenberg told Reuters.

The company said it intended to refinance the debt facilities this year, and reduce its net debt as it expected to generate positive cash flows helped by an expected market recovery.

PGS has previously said it targeted a debt level of below $500-600 million, while its interest bearing net debt stood at $1.3 billion at the end of the first quarter.

PGS shares initially fell by 24% following the announcement and traded down 17% by 0929 GMT, while the European oil and gas index was broadly flat.