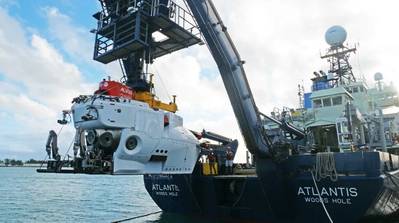 The DSV Alvin, one of the world’s first deep-ocean submersibles, is a unique state-of-the-art vessel capable of submerging to thousands of meters underwater. It was launched in 1964 and has been involved with several historic events. For example, in March 1966, it supported recovering a hydrogen bomb lost by the U.S. Air Force off Palomares, Spain, and in September 1968, it recovered a F6F Hellcat lost in training during World War II. The submersible has also been utilized to study black smokers, which are chimneys or underwater volcanos formed from deposits of iron sulfide, around the Galapagos Islands to investigate life forms living from hydrothermal vents.

Famously, DSV Alvin was used again in 1986 to survey the wreck of the Royal Mail Ship Titanic, which sank in April 1912. Following this journey, the submersible surveyed the remains of USS Scorpion (SSN-589), which was tragically lost in May 1968.

The DSV Alvin is operated and maintained by WHOI in Massachusetts, and NAVSEA is the certifying authority. When an overhaul of the Alvin was needed, Carderock’s technical experts were contacted, including those in the Weight and Stability Branch, to support NAVSEA review and concurrence of the DSV’s stability tests.

“Even though our branch is the expert of ship stability, every ship is unique, particularly the one-of-a-kind DSV Alvin,” Bryden said. “The amount of time between these events – every seven years or so – creates hurdles, particularly with respect to technical continuity.”

Although this is not Carderock’s first time supporting the DSV Alvin, it was a first for Bryden and the associated NAVSEA team. Carderock had previously executed stability testing for the vessel in 2006 and 2013, keeping records of challenges engineers encountered along the way, which was something Bryden appreciated.

“All of the Carderock engineers involved with previous stability tests have moved on,” he said. “Paul Daly worked the most recent 2013 test and he has since retired. Brian Heidt and Harry Wellens oversaw the 2006 tests. Fortunately, the branch kept lots of photographs, drawings and notes from the previous evaluation. Particularly useful were the notes kept on the problems and complications that occurred in the past. That helped us prepare solutions. The WHOI provided a large trove of useful documents, too, mainly of the vehicle’s history.”

Bryden boarded the Research Vessel Atlantis, DSV Alvin’s support ship, on Oct. 14, 2021, and sailed with the WHOI crew from Massachusetts to Bermuda. During their time in Bermuda, he and his NAVSEA teammates worked closely with WHOI engineers on a quiet pier in Saint George’s Harbor.

“The pier was protected from the ocean and was well away from the busier areas of Bermuda,” he said. “One challenge the crew did encounter was COVID restrictions, which limited our ability to go on shore.”

The team began their assignment by checking the life support system of DSV Alvin. After that, they evaluated the main ballast system, the variable ballast system and the trim system.

“When the main ballast tanks are filled with water, the submersible is designed to be close to neutral buoyancy,” Bryden said. “At that point, the variable ballast system can be fine-tuned to get the needed buoyancy just right – adjust for salinity, for personnel weight and to make up for any items brought into the science basket from the ocean floor.”

Once all those systems were verified to be functioning properly, the team’s attention turned to the stability tests. A pilot and two engineers boarded DSV Alvin and remained inside the vehicle’s 7-foot diameter titanium sphere for a long day of work. Bryden said he was looking for the ability of the submersible to resist overturning forces such as wind, waves and unsymmetrical loads, among other things. He was also observing for those forces during submerged maneuvering.

With the stability tests completed successfully, Carderock’s on-site assistance was no longer required and Bryden returned home. Just two weeks later, DSV Alvin, which had been upgraded the past year, made its deepest dive ever. Bryden said the rigorous qualification process is not yet complete, however, but with the overhaul, the DSV will be certified to dive 6,500 meters in the summer of 2022 – a 44 percent increase to its previous depth capabilities – and will be able to access 98 percent of the ocean floor.