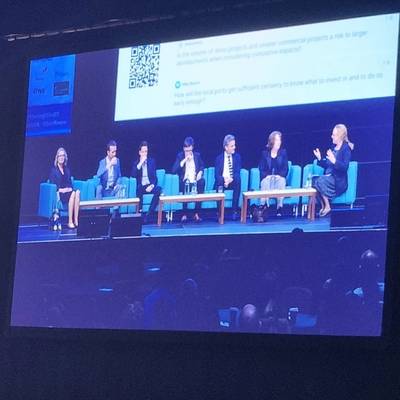 The Celtic Sea is well positioned to maximize its position as an early hub for floating offshore wind. Still, it’s’ going to be a huge industrial challenge not unlike the oil industry faced when developing the Brents in the 1980s, today’s Floating Offshore Wind conference in Aberdeen heard.

In the pipeline, via planned bid rounds, there’s an opportunity for 4GW of floating by 2035, she said, with an additional 20GW by 2045 to “push the sector forward.”

Donovan says the region is a “blank canvas” to work on, having had no previous offshore wind built there, meaning they could learn from mistakes made elsewhere, designing a holistic grid strategy, for example. There were also opportunities to export power to Ireland and further afield, such as France.

But Donovan said the sector had five main challenges: infrastructure, especially ports; the grid, which is “absolutely critical to get right” for the sector in the region; supply chain opportunities and looking at UK content; skills and talent; and research and development.
In terms of ports, she outlined two where there is a lot of focus: Pembroke and Port Talbot. Pembroke is already investing, including £42 million in new quay development, while ABP’s Port Talbot is more of a “blank sheet.”

Tim Stiven, Innovation and New Ventures Lead (Marine) at The Crown Estate, agreed that the Celtic Sea’s strength will be having early development. But he said, “it’s an enormous industrial undertaking.”

The anchor cable for 4GW would span from Milford Haven to Cardiff and back again. It will need a lot of laydown area, a lot of skill, a lot of marshaling, he said.

For its part, Stiven said The Crown Estate, which manages the UK’s seabed (except Scotland’s), said they were working to speed up consenting processes by running environmental and spatial work concurrently.

Seb Rae, Deputy Project Lead, Celtic Sea, RWE Renewables, said the development of port infrastructure in Wales would be critical to the successful deployment of these projects. He says RWE was in the process of working with ports to design port space.

But while there will be a lot of focus on large-scale steel-driven components, there will be a cascade into the supply chain, with thousands of kilometers of mooring lines needed, says Adam Morrison, project director – Moray West Offshore Wind Farm, Ocean Winds. A lot of sub-systems will create opportunities, they may take time, but where there are hubs, we are starting to see this medium to long opportunity for the supply chain, not just in steel fabrication, he said.

Martin Carruth, commercial director at Marine Power Systems and the only supply chain member on the panel, also said that the pricing dynamic was important. If we don’t get it right, we will drive a lot of supply chain capacity out of the UK. The Celtic Sea has excellent capacity, but it’s somewhat less mature than in Scotland, so more work needs to be done, he says. Collaboration will be important to that.
Skills shortage is also a challenge, said Morrison.

“The skills shortage is starting to bite. We need to view this as a non-competitive issue, or we will continue to be working with the existing skills and resources pool, and we will all fall short. We need to do everything – STEM, EDI, apprenticeships. At a developer level, we need to do all of that. At a developer level, we need to work together on industrial-level initiatives and recognize how crucial they are. We also need to sell our sector. We know it’s cool, but we need to look at it regionally and sell the sector and that [show] it’s an interesting place to work, that electrical engineering is cool and will provide high-quality long-term jobs.”

What none of the panelists mentioned, but was being discussed on the sidelines, was the lack of maturity of floater technology, the rising cost of steel (driving some to focus on concrete – with the CO2 footprint it brings) and the challenges turbine manufacturers are facing even to deliver existing demand. It was also pointed out that few of the panel actually had current projects in the Celtic Sea.

Speaking at the start of the session, which focused on the Celtic Sea, was Hugo Buis, regional VP, offshore power, Shell.

Shell is in a joint venture with ScottishPower Renewables, which is looking to build 5GW of floating offshore wind power through the MarramWind and CampionWind ScotWind projects off the east and northeast coasts of Scotland.

He said these projects are a stepping stone to build at scale as fast as possible and to create certainty around the pathway for floating offshore wind.

“If you look today at what the supply chain is facing, we need more breathing space to get to the innovation new need, especially for floating,” said Buis. The investment case as an owner and developer, but also customer, and having the right market set up, is also important, he said, but not currently easy.

He said “speed” is a key focus, and gave an example, saying that Fugro had done 10,000 km of survey using two ships over 200 days in the project area.

“That’s the way to move fast,” he said. He said 5GW is a huge project that would provide power to 6 million homes, “but to get it on time and into the water, we need cooperation (with the supply chain).”

A lot of the challenge for floating is to get the cost down, and that’s not even happening in the fixed bottom wind today, with challenges on prices.
Buis likened the scale of the challenge to when the Brent fields were being developed in the 1980s. “Building an industry like that is a big challenge.”

Shell is a part of the TetraSpar demo in Norway, and Buis says they will learn from that, including looking at how to maintain and keep these structures safe.

Located 100 km off the east coast of Scotland, in water depths averaging 77 m, the proposed CampionWind floating offshore wind farm could deliver up to 2GW of renewable energy.