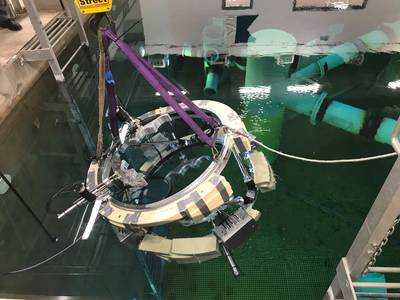 A robot designed to hook onto, and scale up and down, large mooring chains, both at subsea level and in the air – with a nondestructive testing (NDT), ultrasonic imaging system on board that scans for critical defects – has recently undergone field trials.

The new climbing robot, named RIMCAW (Robotic Inspection of Mooring Chains in Air and Water), is the result of a yearlong, fast-track project that secured funding from Innovate UK, the Government agency behind finding and driving the innovations that will grow the UK economy. It is being delivered by collaborative partners Computerized Information Technology Ltd, Innovative Technology and Science Ltd, London South Bank University and TWI Ltd.

The inspection of large mooring chains, of the type most commonly used in the oil and gas industry, presents challenges due to the dynamic service conditions of both the underwater and atmospheric environments. RIMCAW, with its ability to autonomously move up and down a mooring chain, and handle the catenary curve, as directed from a top-side control system, is designed to uniquely address these and will start scanning for flaws as soon as it is deployed. It will identify issues such as fatigue cracking as it progresses, and record the scanned data for subsequent downloading and analysis once it has completed its inspection.

During field trials in the diving facility at TWI, Middlesbrough, the robot was tested for being neutrally buoyant, watertight and functional as anticipated, while simultaneously putting its sophisticated hardware through its paces. These simulated trials have proved that RIMCAW is fit-for-purpose, as well as commercially viable, thereby paving the way for further field trials in real-world operating conditions.

Channa Nageswaran, RIMCAW Project Leader and NDT Team Manager at TWI explained, “Failure of mooring chain systems in offshore oil and gas structures represents a critical threat to the assets themselves, human life and to the environment. As a result, considerable effort goes into ensuring that the integrity of the chains is maintained to high standards, and a key part of this is increasing the precision and reliability of inspection methods.”

Nageswaran continued, “The RIMCAW robot will enable chains to be inspected in service for the first time and can be rapidly deployed on demand. In combination with its ability to scan each mooring chain link separately for critical defects, using the on-board NDT technology, it will offer significant benefits to industry. These include: provision of data on the emergence of critical fatigue cracking to inform traceability of mooring chain lifetime monitoring; diminished risk to the environment, improved health and safety for personnel; and potential cost savings as a result of the enhanced inspection procedures.”