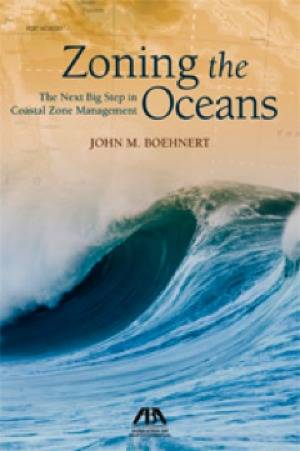 With oceans considered by many as one of the last frontiers, the American Bar Association's new book “Zoning the Oceans: The Next Big Step in Coastal Zone Management’’ is intended to help experts and government planners use zoning as a vehicle for ocean development and management. It is claimed to be the first book to focus on new and emerging state ocean zoning programs in the context of recent developments in offshore coastal zone regulation at the state and federal levels, say the publishers.

Typically, states can use ocean zoning initiatives to extend their influence three nautical miles (almost 3 ½ miles) to the boundaries of federal waters. However, through skillful use of marine spatial planning techniques and ocean zoning, a state can actually extend its influence well into federal waters and well into the waters of other states, requiring that certain federally regulated activities in those waters be consistent with a state’s own coastal management program.

The regulated activities that may be affected include offshore alternative energy development; oil, gas and mineral extraction; shipping and transportation; underwater cabling and communications; and recreation and tourism.

The book delves into a wide range of coastal zone management issues, including how states can use ocean zoning regulations to foster offshore renewable energy development, such as wind and wave energy. It also explores how to protect sensitive coastal environments from harm.

ABA explains that “Zoning the Oceans’’ contains four parts: Two provide an overview of coastal zone management and ocean zoning approaches at the state and federal levels, and two focus on the development, design and implementation of the Rhode Island’s Ocean Special Area Management Plan, the nation’s first state ocean zoning plan to be federally approved. Other states have looked to this plan as a possible blueprint for ocean zoning initiatives.

The book is available for order at: http://ambar.org/zoning