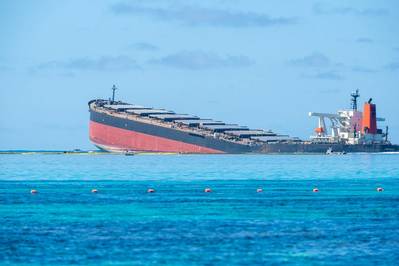 Sometimes bad things happen in the worst possible places – like the MV Wakashio running aground on shallow reefs off the south-east coast of Mauritius on July 25. The wreck of the bulk carrier ship began leaking oil in front of a nature reserve island (Ile aux Aigrettes), a couple of kilometres from a marine park (Blue Bay), and close to an internationally important wetland area (Pointe d’Esny Ramsar Site).

The MV Wakashio was carrying 4,000 tonnes of oil, which hardly compares to the 400,000 tonnes spilled in the Deepwater Horizon disaster of 2010. But it was the vessel’s proximity to the globally recognised cluster of ecosystems in Mauritius that means this spill could have long lasting consequences.

Mauritius is a biodiversity hotspot and much of the island’s unique wildlife depends on intricate connections between the reefs, lagoons, seagrass meadows and mangroves, so pollution in one habitat can have a devastating ripple effect.

With that in mind, what does the recent oil spill mean for the environment here?

What happens during an oil spill?
As soon as oil enters the ocean, lighter compounds in the fuel evaporate and the surrounding air can become toxic to wildlife and even harmful to human health. Oil slicks form on the sea surface and are carried away from the spill site.

When reefs and other habitats are nearby, it’s this early window that is most crucial for preventing damage. Containing the spill with booms or collecting the oil while it is on the surface with skimmers can help stop it spreading.

As the lighter components of the oil evaporate, a heavy sludge forms and can be carried by the tide towards the coastline. Washed up, it effectively smothers any organism it touches, including corals, fish and seabirds, while toxic compounds accumulate in their tissues. Eventually, microbes will break down the remaining oil, but this may take many years. 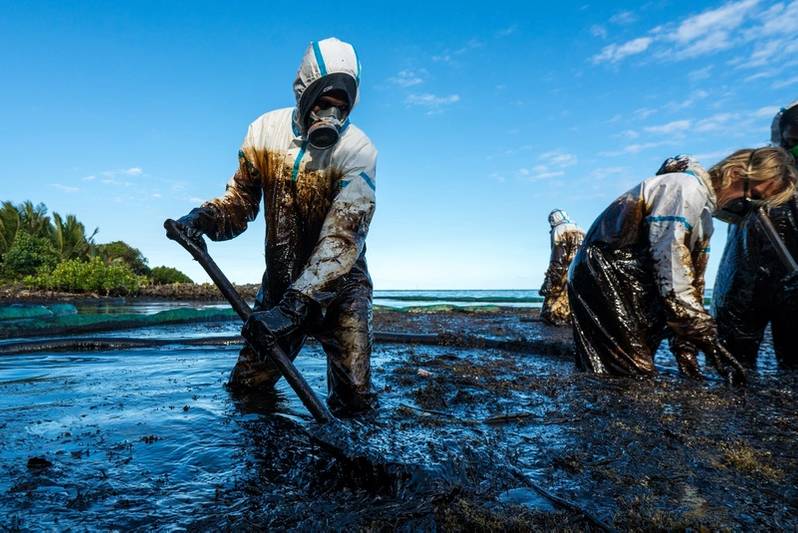 Connections in coastal ecosystems
More than 500 metres of coral reef are thought to have been destroyed by the ship as it ran aground, but this is just the beginning.

As the oil sinks, it can cover more of the reef. Corals depend on sunlight for sustenance but they also eat floating microorganisms called zooplankton. Aside from clouding the water and reducing sunlight, oil pollution has been shown to kill zooplankton, while the toxic chemicals in crude oil weaken the ability of corals to photosynthesise. Deep water corals coated in oil experienced tissue swelling and ruptures.

In the years following an oil spill, growth and reproduction is reduced, leaving less live coral on reefs. In spite of this, coral reefs are resilient ecosystems and can recover to pre-disaster conditions over several decades, as long-term research following an oil spill in 1986 off the coast of Panama showed.

Key to that recovery are the efforts of local species. Parrotfish, for example, provide an essential service to reefs on the south-east coast of Mauritius by eating seaweeds that could otherwise choke and consume the coral when it’s weakened by pollution. But they don’t spend their whole lives doing this, they’re born and raised in nearby mangroves and seagrass beds. 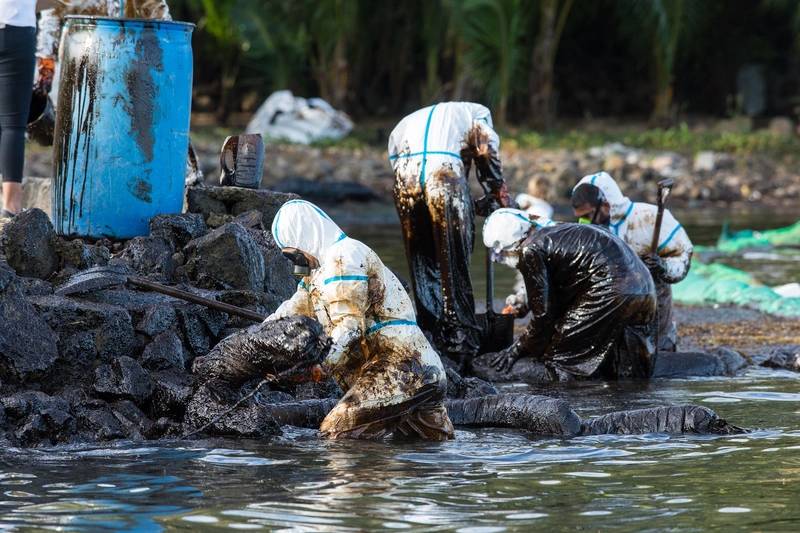 Mangrove forests are coastal wetlands comprised of a dense jumble of trees that thrive in salt water. Their tangled roots form almost impenetrable mazes that offer nursery habitats for parrotfish, snappers, jacks, barracudas and even sharks. Here, young reef fish can grow up safe beyond the reach of larger predators.

Seagrass form underwater plains of flowering plants. They are another kind of nursery refuge for ocean life, but, like mangroves, they struggle to recover from oil pollution. Both habitats tend to flourish where waves and tides are gentle. Sediment builds up around them and so does oil sludge.

Aside from nurturing future generations of coral reef fish, mangroves and seagrass meadows trap material that runs off the land, providing clearer coastal waters over reefs. In turn, reefs absorb the energy of waves from the open ocean, protecting mangroves and beaches from erosion.

Marine life in places like Mauritius rely on all three ecosystems, and species often reside in one while feeding in another. This ensures a steady flow of nutrients between them. Seabirds nesting in mangroves feed on seagrass meadows and their organic waste is carried onto reefs where it nourishes organisms there.

These connections mean that if one ecosystem is damaged, the others are also affected. This ensures that the effects of oil spills are often more severe than they might first appear. Only by monitoring and protecting each of these ecosystems can there be any hope for long-term recovery in the region.

The authors
Sivajyodee Sannassy Pilly is a PhD candidate in marine ecology at Bangor University.

John Turner is a marine biology professor and heads the School of Ocean Sciences at Bangor University.

Ronan Roche is a research fellow in marine science at Bangor University.