How Could a ‘Sand Motor’ Help the Great Lakes? 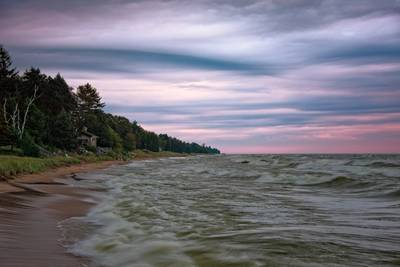 With a significant portion of its land below sea level, the Netherlands has had to be smart about protecting its coastline. Enter the "sand motor," an ingenious and ecologically sensitive solution to maintaining coastline while letting nature do the work.

In this approach, large amounts of sand are strategically deposited and then, over a long period of time, gradually redistributed by the waves. This tactic can protect an area for roughly 15 to 25 years. Now, the Wisconsin Sea Grant Institute is exploring whether this approach could have benefits in the Badger State.
Undergraduate research scholar Briana Shea is part of the team exploring this topic. The University of Wisconsin-Madison's Undergraduate Research Scholars program gives first- and second-year students a taste of cutting-edge research in a variety of fields. At Sea Grant, Shea is mentored by assistant director for extension David Hart. Hart’s areas of expertise include coastal hazards and community planning.
Shea, a sophomore from Holmen, Wis., who is majoring in civil and environmental engineering, will present her findings at UW-Madison's Undergraduate Research Symposium on April 13.
Major questions under consideration include whether a Dutch-style sand motor could work along Lake Michigan and what implementation challenges it might present. "It's a rough, theoretical, 'Is this worth looking into?' type of study," said Shea.
While bluff erosion is a concern, lack of bluff erosion can also be problematic. "Using traditional gray seawalls and those kinds of structures to protect the coast is causing a lack of bluff erosion, so there's not enough sand in the system to nourish the beaches, which is why some areas in Wisconsin are losing their beaches. A sand motor helps prevent erosion, but it also fixes that sediment starvation that some areas have," noted Shea.
Adam Bechle, the J. Philip Keillor Wisconsin Coastal Management and Wisconsin Sea Grant Fellow, and Gene Clark, Sea Grant's coastal engineering specialist based in Superior, have also been involved in this work.
The group has been studying a potential site just south of Port Washington, where there is a beach known to have problems retaining sand.
While the Netherlands is currently home to the world's only sand motor (sometimes also called a sand engine), the United Kingdom will soon be implementing one along its eastern coast. Said Shea, "I’m really interested in green infrastructure and nontraditional ways to incorporate nature more, so this sand motor idea is really interesting to me."
Shea is one in a series of undergraduate research scholars mentored over the years by Hart. Said Hart, "Coastal hazards have been in the news recently. Briana brings a genuine curiosity to the study of coastal processes, and what she learns about the sand motor will be of interest to beach managers along the Great Lakes."
• Environmental Engineering • Great Lakes • lake Michigan
Email

TDI-Brooks was contracted by Coastal Environments Inc. and Gray & Pipe, Inc. who received funding from NOAA’s Office of Ocean…

Our mission is to manufacture innovative and reliable instrumentation for measurements in water. PME offers a variety of sensors and complete systems that monitor various water quality parameters in oceans and freshwater. Data from these sensors can be telemetered…