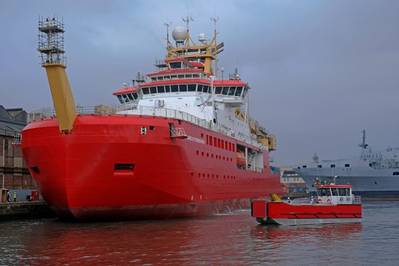 “Although the vessel’s construction is now complete, trials are a critical and final part of the program as they allow our engineers and the ship’s crew to put the vessel through its paces at sea,” said Linton Roberts, Director of Operations at Cammell Laird. “Over the next two weeks our engineers will assess and record important data about RRS Sir David Attenborough’s engineering performance to ensure every aspect of its operation is running safely and efficiently, before it embarks on further scientific equipment testing with BAS.”

The new £200 million ($262 million) vessel will sail across the Mersey to the Liverpool cruise terminal at high tide for crew familiarization, before spending 14 days undergoing technical trials off the coast of North Wales. The shipyard engineers and British Antarctic Survey (BAS) mariners will put the ship through its paces, performing operational checks on the propulsion, steering, engineering and navigation systems.

When technical tests are complete, the BAS ship crew will take over and spend 50 days intensive training at Holyhead Port before embarking on operational and scientific equipment trials around the Irish Sea. The team will test anchoring, maneuvering, dynamic positioning, and helideck landing. Early next year the ship will undertake ice trials in the Arctic, and in November 2021 make its maiden voyage to Antarctica.

The commencement of sea trials is a major milestone in the four-year build program. From laying the keel in October 2016, to the hull launch in July 2018 and the Royal ceremonial naming in September 2019, more than 1,300 local personnel, 70 apprentices and many hundreds of specialist subcontractors and suppliers have been involved in constructing the 129-meter, 15,000 tonne vessel.

David McGinley, Chief Executive Officer of Cammell Laird Shiprepairers and Shipbuilders and Atlantic and Peninsula Services, said, “This vessel is a true celebration of British expertise – from the team who built it right through to the scientific community that will call this ship home. The RRS Sir David Attenborough is the single biggest and most ambitious build in the history of Cammell Laird and it’s an incredibly proud moment to see her embark on sea trials.”

Professor Sir Duncan Wingham, Executive Chair at Natural Environment Research Council, said, “The commencement of sea trials is a very important next stage for the RRS Sir David Attenborough. We now enter a crucial 12 months as we prepare this world-class polar research vessel for its maiden voyage.”

The ship’s development has attracted wide attention since online voters rallied for Boaty McBoatface in a campaign to name the state-of-the-art research vessel in 2016. An NERC panel opted instead to name the ship after the famed BBC naturalist.

Operated by BAS, the Rolls-Royce-designed RRS Sir David Attenborough is the largest civilian ship to be built in the U.K. in three decades, designed to transform U.K. research in the polar regions. Built to carry out oceanographic and other scientific work in both the Antarctic and Arctic as well as transporting supplies to Antarctic research stations, its missions will aim to improve understanding of changing climates.

“This magnificent ship will take U.K. scientists deep into the heart of the ice-covered polar seas. With state-of-the-art technology they will investigate the dramatic changes in the polar oceans,” said BAS Director, Professor Dame Jane Francis. “This exciting moment marks a major milestone in the construction as so many people have worked tirelessly over the last four years to bring our new ship to fruition. As we seek to find answers to the current climate crisis, this ship will take us to the ends of the Earth to seek answers and to help us understand our future world.”

Science Minister, Amanda Solloway, said, “The RRS Sir David Attenborough will be critical in assisting our leading scientists to take to the polar seas and advance our understanding of the impact of climate change on the world.

“As we build up towards its maiden voyage, today’s departure for sea trials is a momentous event for this remarkable ship and I will be watching eagerly as it completes the next stages of its journey towards Antarctica.”

High-tech facilities on board the new ship will enable more ambitious expeditions and deploy advanced marine robotics to help researchers explore hard to reach polar areas. Once completed, the vessel will be capable of spending 60 days at sea without resupply, and with a range of over 35,000 kilometers. The ship will also be equipped to break ice to a thickness of 1.5 meters due to its unique hull design, the integration of the propeller and rudder with the hull, and the use of powerful yet efficient engines.

Four Bergen B33:45 engines will provide both mechanical propulsion and electric power generation on board. The B33:45 runs on low sulphur fuel, down to very low levels. The engines are also fitted with selective catalytic reduction (SCR) systems.

The vessel will comply with both International Maritime Organization (IMO) Tier II and Tier III rules and meet the DNV Silent R class for noise.

The vessel has electrical systems with 5 MW peak effect battery capacity that reduce the vessel's fuel consumption, emissions, noise and vibration, as well as increasing redundancy and consequently safety.

Autonomous vessels are quickly gaining acceptance across the maritime sector, but especially in government and military applications…