Edward Lundquist is a retired naval officer who writes on naval, maritime... 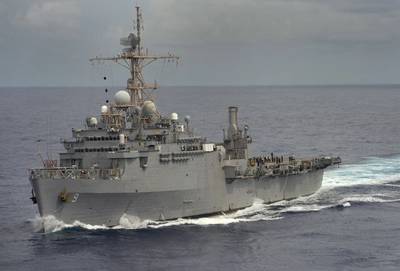 The former Austin-class amphibious transport dock USS Denver (LPD 9) was sunk in a blaze of glory as a target ship during the recent Rim of the Pacific (RIMPAC) Exercise 2022. The 9,600-ton, 561-foot Denver, which was commissioned in 1968 and served until being retired in 2014, had been stored with other inactive ships at Pearl Harbor, Hawaii, before being sunk about 50 miles north of Kauai in about 15,000 feet of water.

Before going down on July 22, Denver made one more valuable contribution to the Fleet. Navy salvage and repair experts set explosive charges aboard the ship that enabled battle damage assessment (BDA) teams to respond to actual damage.

According to Jamie Koehler a Naval Sea Systems Command spokesperson, the event exercised  the capabilities and limitations of an expeditionary group of Reservist and Regional Maintence Center (RMC) Sailors for emergent repair when paired with an emergent repair container capability.

“The event provided the opportunity to survey realistic blast damage and conduct planning to utilize the Emergent Repair Capability afforded by the Emergent Maintenance and Repair Container (EMARC) along with Surge Maintenance (SURGEMAIN) Navy Reservist Sailors to plan and execute emergent repair,” Koehler said.  “Divers were offered a realistic training environment to learn how to assess battle damage and how to effectively repair the ship.”

“The training simulated exactly how a ship would look after an attack or casualty and offered Mobile Diving Salvage Unit One and Pearl Harbor Naval Shipyard divers a chance to work as a team to assess, repair and return the vessel back to sea,” Koehler said.  “Opportunities like this also identify future manning requirements, equipment shortfalls, and medical response preparations that can be measured appropriately.”

According to a news release from NSWC-PHD, REPTX offers a unique opportunity to evaluate innovative products and services that could potentially help sailors carry out the repairs needed to keep them underway.

During the SINKEX, Denver was pummeled from land, sea and air.  A U.S. Third Fleet press release said, “F/A-18 Hornets from Marine Fighter Attack Squadron 232 (VMFA-232), Marine Air-Ground Task Force 7 (MAGTF-7) used Joint Direct Attack Munitions (JDAMs) against a ship, the ex-USS Denver (LPD 9), during a sinking exercise (SINKEX) as part of Exercise Rim of the Pacific (RIMPAC) 2022. VMFA-232 coordinated the strike against the environmentally clean, decommissioned naval vessel in cooperation with the U.S. Navy and the U.S. Air Force. During SINKEX execution, four U.S. Marine Corps F/A-18 Hornets from VMFA-232 also fired High-Speed Anti-Radiation Missiles (HARM), followed by a Harpoon (AGM-84), and JDAMs. The F/A-18 is unique within the U.S. Marine Corps for its ability to employ a diverse array of air-to-surface and air-to-air weapons.”

“SINKEX is more than the end result. It takes a team of capable, adaptive partners from different nations and disciplines to come together to find, fix, track, target, engage and assess with the agility and precision required to put the right ordnance in the right place, at the right time, every time,“ said Royal Canadian Air Force Brigadier-General Mark Goulden, commander of the RIMPAC Combined Force Air Component Command. “The SINKEXs at RIMPAC provide us with a uniquely complex and challenging environment for partner forces to hone those important skills. Being able to work together was our goal, and SINKEX is a demonstration of our success.”

In addition to Denver, the ex-USS Rodney M. Davis (FFG 60) was also sunk as a target during RIMPAC.   The two ships were towed from Pearl Harbor to the designated target area by USNS Grasp (T-ARS 51).