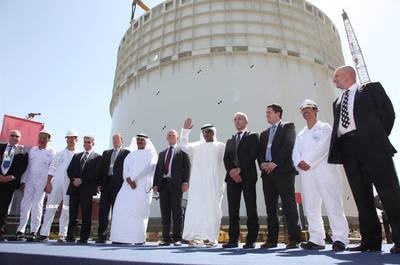 The first module, the bogie support structure, standing 22 metres high, with a diameter of 30 metres and weighing 1300 tonnes will be transported to Korea to integrate with the Prelude FLNG vessel. Other modules will soon follow.

The Prelude FLNG unit will be 488-metres long and when fully loaded will weigh more than 600,000 tonnes. It will be the largest structure ever sent to sea displacing as much water as a fleet of six aircraft carriers. The vessel is to work at the Prelude offshore field 200 kms from the Australian coast.

The turret for Prelude FLNG is the biggest turret ever built and over 800 workers are engaged in its construction. It is being built in five modules which when put together will weigh in at 10,500 tons. The first steel cutting took place on May 5, 2012. The nearly 100-metre mooring turret is a vital element of the vessel and along with four groups of mooring chains and suction pile anchors will constitute the largest system in the world and help the vessel to remain stable in high velocity tropical cyclone territory.