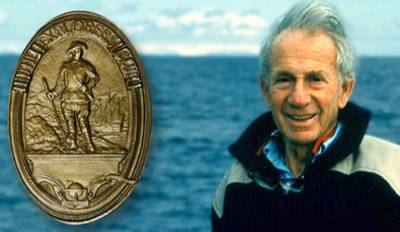 UCSan Diego inform that the Explorers Club will honor renowned Scripps scientist Walter Munk with the Explorers Medal at its 110th annual dinner March 15 at New York’s Waldorf Astoria Hotel. The event, “Exploration & Technology: Celebrating Innovation in Discovery,” will pay homage to Munk’s contributions to scientific exploration and discovery, achievements that have made him known prominently as the world’s greatest living oceanographer.

In honoring Walter Munk, the club recognizes the geophysicist’s multitude of scientific achievements, which include working with his mentor and famed oceanographer Harald Sverdrup in developing a system for forecasting breakers and surf on beaches, a technique applied broadly in the Pacific and Atlantic theaters of World War II, including the allied landings at Normandy. Munk also has explored Earth’s rotation, long-range acoustics, and more recently the relationship between changes in ocean temperature, sea level, and the ocean between ice sheets and the seafloor.

“Since coming to Scripps Institution of Oceanography 75 years ago as a young doctoral student, Walter Munk has become one of the world’s most highly respected oceanographers and has been a face of Scripps and of oceanography, as well as an ambassador for science,” said Margaret Leinen, director of Scripps. “I’m delighted that the Explorers Club has bestowed this honor upon him. No one deserves to be recognized as a scientific explorer more than Walter.”

More than 40 of Munk’s friends will join him at the recognition dinner, which will include more than 900 guests. These include Scripps Director Margaret Leinen, Scripps Assistant Professor Octavio Aburto-Oropeza, Birch Aquarium at Scripps Executive Director Nigella Hillgarth, and Scripps Executive Director of Development Stuart Krantz. They will be joined by Scripps Director’s Cabinet Chairman Steve Strachan, Scripps Director’s Cabinet members Patty Elkus (and her husband Rick) and Phil Tauber (and his wife Gayle), as well as Nancy Nenow, an E.W. Scripps Associates member and president of the San Diego Chapter of the Explorers Club, who nominated Munk for the Explorers Medal.