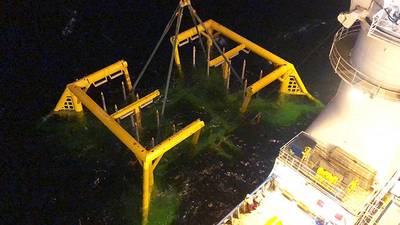 The first subsea installation and construction campaign for the Duva field development is now underway with the installation of the Integrated Template Structure (ITS), Neptune Energy said on social media on Tuesday.

The ITS is the first large scale piece of fabrication work to be completed for the Neptune Energy-operated Duva oil and gas field in the northern part of the North Sea, Norway. Weather conditions permitting, it is expected to be installed over the course of a five-day campaign, the London-based independent oil company said.

According to Neptune Energy Norge’s Managing Director Odin Estensen, "By installing the ITS now, we are on track for undertaking drilling later this year, leaving us well positioned to reach first oil in the fourth quarter of 2020."

Duva is being developed alongside Gjøa P1 as subsea tiebacks connecting to the nearby Gjøa platform, operated by Neptune Energy Norge.

The Duva field is located 6 kilometers northeast of the Gjøa field (12 kilometers from the Gjøa platform). Recoverable resources are estimated to be 88 million boe, and it’s expected to yield around 30,000 boe per day at maximum production.

The subsea tiebacks will be delivered under an alliance agreement by TechnipFMC utilizing the Neptune Subsea Alliance Agreement, the drilling operations will be undertaken by Odfjell and topside modifications completed by Rosenberg Worley.

Offshore services company Subsea 7 on Friday announced it has secured a contract from Chevron for the subsea installation services at the St.