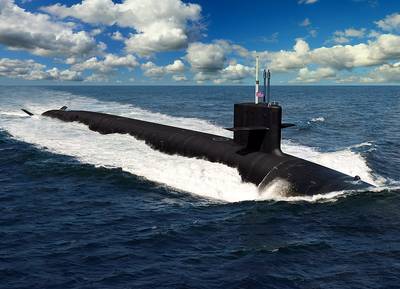 An artist rendering of the future U.S. Navy Columbia-class ballistic missile submarines. The 12 submarines of the Columbia-class will replace the Ohio-class submarines which are reaching their maximum extended service life. It is planned that the construction of USS Columbia (SSBN-826) will begin in in fiscal year 2021, with delivery in fiscal year 2028, and being on patrol in 2031. (Illustration: U.S. Navy)

General Dynamics Corp was awarded a $9.47 billion contract for the construction of Columbia class submarines, moving the U.S. Navy's top procurement priority out of the early-construction phase, the Pentagon said on Thursday.

General Dynamics was named as the prime contractor for Columbia class in 2016 with Huntington Ingalls working on design and construction of major assemblies and modules for the submarines.

The 12 boats in the program will replace the 14 Ohio class submarines that are slated to begin retiring in 2027. The Ohio class is one of the three legs of the U.S. nuclear arsenal.

The program is on a tight schedule as the first boat is slated to begin patrols in 2031.

The lead ship, usually the costliest, will be $9.2 billion in current year dollars. The average cost per ship must stay below $8 billion in 2017 dollars, a navy official told reporters during an online briefing on Thursday.

The Navy has estimated that the procurement cost for the fleet of submarines at about $110 billion.

But the Government Accountability Office, a U.S. government watchdog, has said that this cost estimate is unrealistic "because it is based on several overly optimistic assumptions, such as the amount of labor needed for construction."

In 2019, GAO has said the program has an expected cost of $267 billion over its life cycle including procurement.

A boost to the Pentagon's budget this year was in part due to the need to increase funding to buy the submarines.