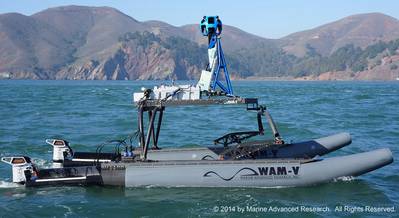 A new high-tech unmanned vessel, launched with the help of Google, will use innovative technologies from the boatbuilding and mapping fields to map shorelines and raise awareness of the impacts of global sea level rise.
Originally designed to be worn by backpackers, Google's proprietary Street View Trekker camera system was provided on loan to the San Francisco Baykeeper organization, allowing them to create bay-level maps. It plans to use the imagery collected—nearly 500 miles of coastline ranging from San Jose to Antioch, California—on its website and for educational purposes. It will also help illustrate the threats posed by global sea level change to critical wetlands.
Electric motor developer Torqeedo said it was chosen to power the craft as clean, powerful and efficient propulsion was a high priority.
"It's a Google Boat," said staff scientist for the San Francisco Baykeeper organization, Ian Wren. The small, remote-controlled catamaran, a Wave Adapted Modular Vehicle (WAM-V) designed by Marine Advanced Research, features a modified hull design that flexes to adjust to the water's surface and provides ultimate stability. Baykeeper's WAM-V sports twin Torqeedo Cruise 4kW electric outboard motors rigged with Power 26-104 lithium batteries. The boat is able to run for hours with a nearly zero environmental footprint, thanks to onboard traditional and solar charging capabilities.
"A lot of people know about sea level rise," said Sejal Choksi, an environmental lawyer and Baykeeper's interim director. "We are hoping these images will really bring the reality home to the public, that they will look at pictures of places they know and say, 'Oh my gosh, this is going to be underwater.'"
The Google Trekker, WAM-V and Torqeedo technology has also recently completed a mapping project of American Samoa.
• Google • American Samoa • California
Email