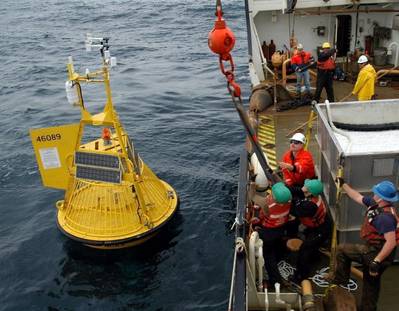 A team of U.S. Coast Guardsmen at the National Data Buoy Center helps to maintain a nation-wide network of data collecting weather buoys.

Five Coast Guardsmen deploy with buoy tenders and other Aids to Navigation units to manage the system of weather buoys, according to Team Leader Chad Pool.

The weather buoys measure wind speed, atmospheric pressure and air pressure as well as sea surface temperate and wave height. The information is displayed on the NDBC website at https://www.ndbc.noaa.gov/.

NDBC is part of the National Oceanic and Atmospheric Administration’s National Weather Service.

Maintaining Aids to Navigation is the Coast Guard’s oldest mission, tracing its roots to the ninth law passed by Congress that created the U.S. Lighthouse Establishment in 1789. Today, the U.S. Coast Guard maintains more than 48,000 buoys, beacons and electronic aids that help mariners to safely navigate more than 25,000 miles of waterways.

“Since meteorological observations are released to public, mariners have timely access to the data needed to factor into their immediate decision making needs should they require supplemental or localized information in addition to the available marine forecasts,” said Pool.

“The main benefit of this job is knowing that the weather buoys we deploy and maintain directly affect the safety of the local and commercial mariner,” said Pool.