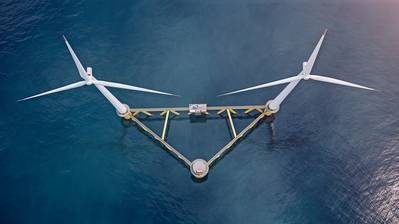 Energy expert and assurance provider DNV has provided Swedish floating wind tech firm Hexicon with a Statement of Feasibility for its TwinWay demonstrator which will be installed and operated at Metacenter, off the coast of Norway.

With achieving this first step in the certification process, DNV considers the TwinWay concept feasible for further development towards a full-scale demonstrator.

"The Statement of Feasibility from DNV is a valued milestone in our TwinWay demonstrator project”, explains Marcus Thor, Chief Executive Officer of Hexicon. “After years of development, we are now progressing through the next project phase, aiming to deploy the full-scale version of our patented design for the first time.”

"Norway is at the forefront of developing floating wind having had the first full-scale floating wind turbine in operation since 2009 and currently has the world’s largest floating wind farm, Hywind Tampen, under construction, explains Sille Grjotheim, Director and Country Manager Norway for Renewables Certification at DNV.

"Certification of innovative projects like TwinWay helps to demonstrate the performance, reliability, and commercial viability of technological advances which push the boundaries of current technical and engineering knowledge. To further support the growth of floating wind in Norway with certification services, we have recently established a local certification team at DNV’s head office in Høvik.”