No Impact of COVID-19 on Tidal Project Yet, Minesto Says 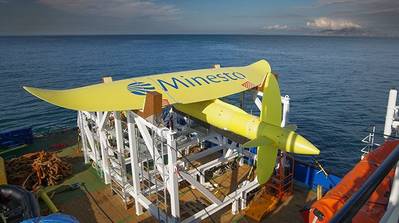 Tidal energy developer Minesto has so far felt no effect of the coronavirus pandemic on the inflow of components for its tidal project in the Faroe Islands, but the company said it was watching the situation closely. “Minesto is closely following developments related to the coronavirus disease COVID-19 to assess how governmental actions and restrictions around Europe might affect operations and project activities.

To date, the company has had no negative impact on incoming components and subsystem deliveries,” the company said.

The major kite system components for Minesto's Faroe Islands project are assembled and are currently being factory tested and commissioned. Minesto is targeting the installation of the first DG100 system in the second quarter of 2020, it said.

"Just like everyone else, we are closely following the situation to ensure that we do what we can to keep our employees safe and to take social responsibility in all the regions where we are operating," said Dr Martin Edlund, CEO of Minesto.

"We are making steady progress towards the installation of our first DG100 system in Vestmannasund. We are very pleased with the continued constructive partnership with SEV who is making headway with their commitments to our joint project. A milestone in this collaboration is the power purchase agreement we signed in mid-February."

Minesto is now carrying out onshore commissioning testing of the DG100 tidal kite system and preparing it to be shipped to the Faroe Islands. At the cable landing site in Vestmannasund, the necessary onshore infrastructure works are currently underway by SEV to enable the two Minesto kites to be grid-connected.

Minesto on Monday also announced the establishment of a Faroese subsidiary, Minesto Føroyar ApS, which will facilitate and further develop ongoing and future installations of Minesto's Deep Green

Dutch shipbuilder Royal Niestern Sander has delivered the hydrographic survey vessel ‘Geo Ranger’ to Geo Plus, after 14 months of constructing…