Innovation @ URI: The smallest deep-sea system that can provide a livestream video feed

The answers to many of life's mysteries have been discovered far below the surface of the seas. However, getting to those depths has not been easy. Thanks to a new fiber optic reel system invented by Brennan Phillips, an assistant professor of ocean engineering at the University of Rhode Island, deep-sea exploration is about to get much more affordable and accessible.

Having worked on large research vessels all over the world, Phillips is well aware of the expense, planning and massive scale involved in deep-sea exploration.

"If you have a large underwater vehicle that you're using, you need several people to run it and a large research vessel to operate it, which is very expensive," said Phillips. "By making the vehicles smaller, the cables smaller and the winches smaller, we can save a lot of money and go more places in the world."

Two years ago, Phillips created a miniature, inexpensive deep-sea camera system called DEEPi. However, he still had to rely on a large research vessel to get it in the ocean. That led to his development of a small deployment system.
"It all comes down to the diameter of the cable," said Phillips. "A cable that is three-quarters of an inch in diameter ends up weighing many tons when you have 4,000 meters of it, which means you need a massive winch to go with it. If you make the cable smaller, everything scales down accordingly."

After experimenting with a custom-designed cable that was still too wide, Phillips ended up using something that can be spotted all over Rhode Island in the summertime, a fishing reel.

"I wanted to get to the point where I had a winch that could get me somewhere deep in the ocean, but I could carry it in a suitcase," said Phillips. "An electric fishing reel is essentially a miniature winch and it's available off the shelf."

Having solved the scale issue, Phillips' next step was to figure out how a cable small enough to wrap around a fishing reel could transmit data, including video, in real time while underwater.

"We didn't have a cable that size with fiber optics in it for data transmission, so we had to invent it," Phillips said.
Not having the necessary equipment to integrate the fiber optics in the fishing line, Phillips requested the help of Jim Owens, principal of Nautilus Defense in Pawtucket.

"When I told Jim that I wanted to a make fiber optic fishing line, I thought he would say 'that's impossible' or 'I can't do it,'" said Phillips. "But he surprised me by saying, 'I think we can do that.' A week later he mailed me a prototype."

"Brennan had very clear parameters and objectives for the system and he let us run with our part of the project," said Owens. "We developed a fiber optic tether that was mass and volume-efficient using our in-house braiding equipment."

With the fishing reel and fishing line now at the same scale as the deep-sea camera he previously developed, Phillips successfully produced the smallest, most compact deep-sea system in the world that can provide a livestream video feed.

The fiber optic reel system is described in the April 2021 issue of Sensors. Co-authoring the journal article with Phillips were URI ocean engineering students Nicholas Chaloux and Russell Shomberg; Adriana Muñoz-Soto, who did an internship on the project for the University of Puerto Rico Mayagüez; and Owens.

Phillips and Owens have filed for a provisional patent for the fiber optic reel system, with the application being sponsored by URI and Nautilus Defense.

Putting it to the Test

Phillips began working on the fiber optic reel system before the pandemic started, but did the bulk of the testing during the pandemic.
In the summer of 2020, he deployed the system a couple of times in the Narrow River in Rhode Island, where the water was calm and flat. He used his own personal boat for the test. Another conducted another test in Narragansett Bay, near Newport.

The first deep-water test took place later in the summer on a day-long boat trip to Atlantis Canyon, 100 miles off the coast of Falmouth, Massachusetts.

"Because of the pandemic, a lot of larger boats were inaccessible at that time," said Phillips. "But because we had this compact reel system, we could do the trip with just three people – me, the captain and one of my students – and still be COVID-safe."

At a depth of 350 meters, the system successfully transmitted live video throughout the cast, capturing footage of euphausiid shrimp, anemones, benthic fish, and other organisms and phenomena, including flashes of bioluminescence.

The reel system was tested at a much greater depth in December of 2020 in Bermuda, reaching 780 meters. Like the previous tests, the system was deployed and retrieved without any issues.

"The results were better than I expected," Phillips said. "I never truly believed it would work because the system includes several components that have never been tried before. I'm sure I screamed at the top of my lungs when it actually worked." 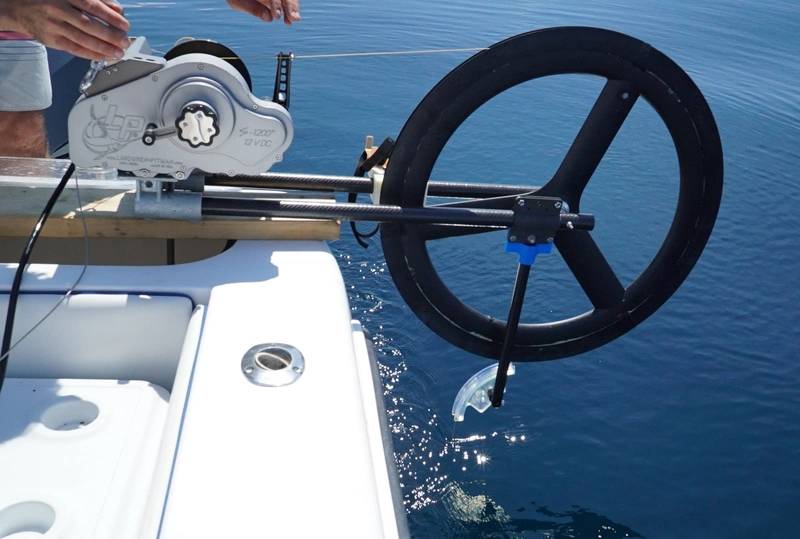 Since the fiber optic reel system is a fraction of the size and weight of a system using a traditional winch, cable and camera, a much smaller boat can be used to transport the system.

"We can use a fishing boat to get this new system deep in the ocean instead of a 100-foot vessel," said Phillips. "That means each time we go out on the water, we'll be saving many times what it would normally cost for an operation."

For researchers such as Phillips, the fiber optic reel system will be a quick, low-cost way to get a camera, sensor or physical sampling device that

needs data transmission down deep in the water. But scientists won't be the only ones who could benefit from a system with these specifications.
"Currently, there isn't a way to deploy deep-sea equipment using an autonomous vessel or a drone using a winch that weighs several thousands of pounds," said Phillips. "But the U.S. Navy would probably have some interesting applications for something that is much smaller and more compact."

As a commercial product, the system could be a game-changer for the fishing industry.

"There would be a lot of benefits to be able to see what your bait or lure is seeing, especially deep in the ocean," said Phillips. "There are a couple of systems on the market that can take pictures or record video, which you can watch later, but this system would provide live video, enabling the person who is fishing to adapt on the fly to what they are seeing."

Phillips won't have to look far to see the reel system put into use. He expects engineering students at URI to find many creative ways to apply it to projects.

"If we have this compact reel system that can be taken out on any boat on any day, it's really great for students because they can make all types of stuff to go on it," said Phillips. "We can enable students to make their own deep-sea equipment using this type of system."
Phillips is excited to see what the students will come up with.

"When I look around my lab, I see a bunch of successful and failed projects that students designed," said Phillips. "That's how good engineering happens, through trying and failing." 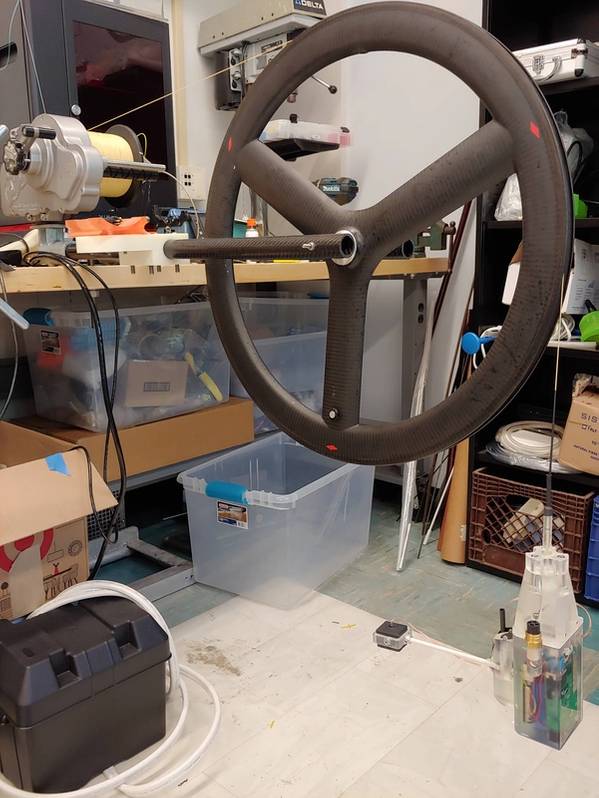