Deep-sea Internet Being Developed at UB 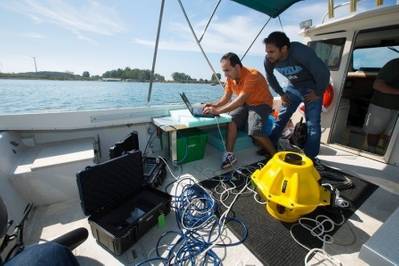 University at Buffalo (UB) researchers are developing a deep-sea Internet: they consider that the technological breakthrough could lead to improvements in tsunami detection, offshore oil and natural gas exploration, surveillance, pollution monitoring and other activities.

“A submerged wireless network will give us an unprecedented ability to collect and analyze data from our oceans in real time," said Tommaso Melodia, UB associate professor of electrical engineering and the project’s lead researcher. “Making this information available to anyone with a smartphone or computer, especially when a tsunami or other type of disaster occurs, could help save lives.”

Melodia and his students will present a paper, “The Internet Underwater: An IP-compatible Protocol Stack for Commercial Undersea Modems,” at the 8th annual International Conference on Underwater Networks & Systems. Hosted by the Association for Computing Machinery, the conference runs Nov. 11-13, 2013 in Taiwan.

Land-based wireless networks rely on radio waves that transmit data via satellites and antennae. Unfortunately, radio waves work poorly underwater. This is why agencies like the Navy and National Oceanic and Atmospheric Administration use sound wave-based techniques to communicate underwater.

Many systems worldwide employ this paradigm, says Melodia, but sharing data between them is difficult because each system often has a different infrastructure. The framework Melodia is developing would solve that problem. It would transmit data from existing and planned underwater sensor networks to laptops, smartphones and other wireless devices in real time. It would be, in other words, a deep-sea Internet.

Kraken Robotics Inc. announced it has achieved a practical resolution of 2 cm with a Commercial-Off-The-Shelf (COTS) Synthetic Aperture Sonar (SAS)…