 Grace, to start us off, can you just give us a short introduction of yourself and an overview of your responsibilities?

I'm an assistant professor at Rutgers University: I teach, I conduct research, I serve in many roles at the university, nationally and internationally. My research focuses on the ecology and physiology of marine organisms, specifically how they respond to climate change and environmental stressors like warming sea water and ocean acidification. I conduct lab and field-based experiments and observations, and I'm also one of the faculty in The Center For Ocean Observing Leadership, (RUCOOL group) where we run one of the most advanced observatories in the world. And we specialize in underwater gliders. So the Slocum Web Glider specifically is the glider tool that we use, now I’m using gliders to observe habitats.

 Can you give us an overview of your ocean acidification project specifically, when and why it was started, and what stage are we at today?

It's kind of a weird story. I was looking into designing experiments to expose marine organisms in the Mid-Atlantic to ocean acidification conditions to see how they responded. The problem was I realized we didn't have much data to design an experiment, to really understand the natural conditions, and specifically the natural variability of those conditions. It became almost impossible to design a realistic experiment. That's when I started looking into some observation tools to get some more data so that we could design better experiments. And being part of the COOL team at Rutgers that uses the gliders, I naively asked, "Why can't we just put a pH sensor onto a glider?" That was about 10 years ago, and at the time the pH sensor hadn't been developed to be able to withstand changes in pressure – going from surface to the bottom – which is what the gliders do when they're profiling.

 So what was the solution?

It was a collaborative research with Sea-Bird Scientific, MBARI, Scripps Institute of Oceanography and Honeywell to develop pH sensors able to withstand the pressure changes. They started testing them on the Argo Profiling Floats, and once they were successfully tested on those floats, I knew it was time that we could possibly try to use them on a glider. I reached out to Seabird Scientific and Teledyne Webb Research to see if they were interested, and they were eager to get involved and give it a try.

 What was the next step?

We collaborated on a proposal to the National Science Foundation of Ocean Technology and Interdisciplinary Coordination Program, and it was successfully funded. So then Seabird Scientific and Teledyne Webb worked together to make some modifications to the sensor that they were using on the profiling floats, and we integrated it into a glider. Tthrough our Rutgers glider program, we did some deployments with it and we were overjoyed by how well the sensor seemed to worked and how robust it was. It provided highly accurate measurements of pH in the field for weeks at a time. 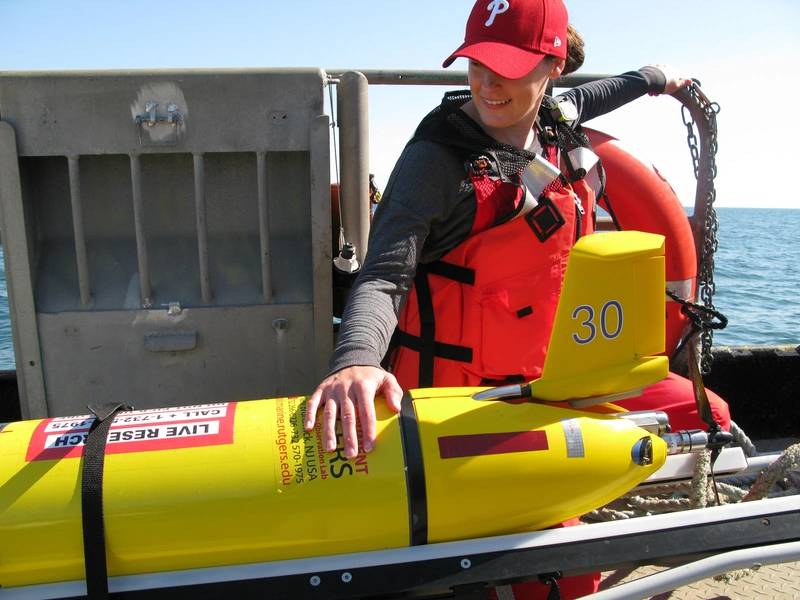  Where are you on the project today?

 Can you discuss the importance of these relationships with the technology partners to work with you to help deliver the tools that make your job easier?

I don't know if it can be done any other way. I don't have a lot of experience working with technology, and this was actually my first glider project. But I just couldn't see any other way to try to do it, especially when the sensor wasn't developed. I think the partnerships are extremely valuable because you can work with industry, they can help design the sensor to fit the needs of the research community. And then we can work with the research community to test the sensors and to make modifications and improvements. For ocean acidification, there are so many different stakeholders that are interested in the data: researchers, fisheries scientists, water quality managers on the state and national level, policy makers … it really does contribute to the needs of a diverse range of stakeholders.

 I know that it is still a work in progress, but can you discuss some of the results that you've seen to-date.

We've done several deployments, and we're really looking at seasonal dynamics on the shelf in the Mid-Atlantic region. With the existing data, we're very limited on the seasonal data, dynamics on the seasonal scale. The other issue, the data gap that we have, is data for sub-surface measurement. We have a lot of surface measurements, which is great. But the bottom is really important because we have a lot of calcifying organisms, our big commercial shell fisheries live in the bottom waters. We have a lot of fish species that live in the bottom waters. And the bottom waters are typically susceptible to low pH or acidic conditions, because especially in the summertime in the Mid-Atlantic, we see such a strong stratification in the water, which means the surface is really cut off from the bottom. There's not a lot of ventilation, so it can become low in dissolved oxygen and low in pH, or more acidic.

 How then, specifically, have the Slocum gliders and the redesigned pH sensors helped to fill in these technology gaps?

With the gliders we've seen dynamics over time. During a year, we can see those seasonal dynamics. What we really see is in the summertime, when we see that high stratification in the bottom water, that is where we typically see the lowest pH during the year. It's important to know the timing because you can time it with an organism's life history. When are they reproducing? When are these shellfish spawning? So you can better understand time periods where organisms might be more sensitive. We are seeing that in the summertime, but we're also seeing differences in space. Nearshore, we get a lot of fresh water coming in from our rivers and our estuaries, and that actually acts to reduce pH or cause the water to become more acidic nearshore.
Then offshore, we have something completely opposite, where we have this warm salty water just sitting off the shelf and that's influenced from the gulf stream. And during mixing events like storms, but also during the autumn when we have these heavy wind periods, the water starts to kind of turn over and breaks up that stratification, we actually see relief of the low pH from the summer on the shelf. And so that mixing acts to really just kind of mitigate ocean acidification on the shelf. So the organisms can then maybe breathe a sigh of relief in the fall when that happens. Now we've expanded it in space through this new project. So we'll have gliders flying in the Gulf of Maine. And then in the North Mid-Atlantic bight and the South Mid-Atlantic bight, and that's really going to just allow us to better understand properties, and different water masses and kind of see what the source waters are doing and how they're feeding in to different parts of the region. And then how that affects ocean acidification.

 When you look at this project today, can you share with us any lessons learned?
For me personally, it was the first project that I've worked with gliders. As a biologist, it was a lot of fun, but also the partnerships made and the opportunities provided to students has been amazing. They've been able to work with this technology. They've learned a lot about chemistry just through working with the sensor. So it iss providing a lot of STEM education to our graduate and our undergraduate students, which is awesome. And then we have challenges with the sensor. So we're working with Sea-Bird to help mitigate some effects of biofouling, which we do see in our summer deployments, because it's warm and there's a lot of biology happening in the summer. We're learning lessons on how to improve the sensor design for future applications. (Bigger picture), it is filling some huge data gaps that we see regionally, nationally and globally.

The glider is a great story, originally developed by Doug Webb to be a thermal glider and to get its energy from the thermal characteristics of the ocean. He showed it to Rutgers University, and they immediately said, "Wait, that's so great. But we need batteries in it, because we need it tomorrow." So we put batteries in it. And now we only deliver gliders with batteries. To date we've delivered more than 800. Rutgers has been a strong collaborator, and we have integrated multiple sensors with them and applications. We've done long-term piloting with them. We've been working on a mission to fly gliders around the world with Rutgers University. The qualities of the glider, the quiet flight, the long endurance and the low cost have been a good match.