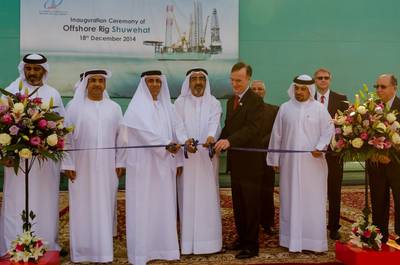 Lamprell has completed the construction of jackup drilling rig, the Shuwehat, and has delivered the rig to Abu Dhabi’s National Drilling Company (NDC) within budget and as scheduled.

The delivery follows Lamprell’s announcement on November 12 stating that the group received a new $365 million contract award from NDC for the construction of two further jackup drilling rigs of a similar design and specification.

Shuwehat is the fifth in a series of eight rigs ordered in April 2012 with the LeTourneau Super 116E (Enhanced) Class design which are being built and delivered by Lamprell to NDC. The third and fourth rigs, the Qarnin and the Marawwah, were completed earlier this year. Lamprell noted that the delivery of three drilling units to one client in a single year is a company record.

Shuwehat rig is the 11th Super 116E jackup drilling unit that the group has delivered to various clients during the last six years. The jackup rig was officially named, and completion marked, at a ceremony held at Lamprell’s Hamriyah facility in the United Arab Emirates earlier today, prior to departure for operations at its drilling location in Abu Dhabi.

NDC Chief Executive Officer Abdalla Saeed Al Suwaidi commented, “Today, we proudly witness the completion of rig Shuwehat, a true technological marvel. This rig represents a great addition to the NDC fleet of modern rigs, and it will help the company maintain the highest levels of reliability and efficiency. A few years back, we partnered with Lamprell to start building offshore jack up rigs in the UAE. We are proud that we made such a strategic decision, and the four previous rigs, namely Makasib, Muhaiyimat, Qarnin, and Marawwah are working safely and drilling for ADMA-OPCO.”

Commenting on the delivery, Jim Moffat, Chief Executive Officer, Lamprell, said, “Lamprell’s project execution this year continues to be of the highest standards and I am pleased to announce the delivery of this fifth jackup rig to NDC, our long-standing client. We have been able to prove once again our ability to complete a major project to world-class standards of safety and quality, and we are proud to construct this latest project in the UAE, for use in the UAE, where we have such strong ties.”

Moffat continued, “The Shuwehat rig is the third rig handed over to NDC in 2014, and we are scheduled to deliver the next NDC rig to the client within a matter of months. We believe that the recent contract award of two rigs with three options by NDC demonstrates our client’s continuing confidence in our ability to maintain our strong project execution track record on a consistent basis and we look forward to working closely with NDC in the coming years.”