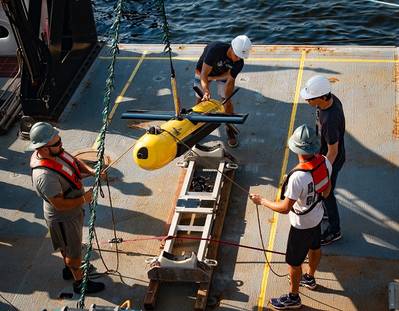 Starting in late September, Kraken Robotic Systems will deploy its sensors and unmanned underwater platforms to conduct ultra-high definition seabed imaging and mapping on the Grand Banks of Newfoundland and other areas of Atlantic Canada, as part of the initial phase of its $20 million OceanVision project.

Kraken’s OceanVision is a three-year project to develop new marine technologies and products to enable an underwater data acquisition and analytics as a service business. Through OceanVision, Kraken aims to accelerate its strategy from sensors and system sales to becoming an integrated provider of Robotics as a Service (RaaS) and Data as a Service (DaaS), the company said.

While near-term focus will be the inspection, repair and maintenance (IRM) segments for offshore oil and gas and wind industries, OceanVision will also address the requirements of other stakeholders in the fisheries, aquaculture, ocean science and underwater defense industries, Kraken said.

Kraken’s President and CEO Karl Kenny said, "OceanVision will result in an end-to-end digitalization solution offering advanced sensors, robots and data analytics as a turnkey service for imaging and mapping of the seafloor as well as seabed assets and infrastructure. Today, high fidelity data is an absolute requirement for coherent input to machine learning algorithms – otherwise it’s garbage in, garbage out. We are uniquely positioned in the underwater industry as Kraken will build, own and operate the sensor-laden drones; Kraken (and partners) will run the missions; and Kraken (and partners) will analyze the data for our customers.”

While OceanVision will enable Kraken to further new technology and product development, the company expects the project will also help it to fine-tune recurring revenue business models.

“We expect recurring revenues from RaaS/DaaS to become a significant part of our future revenue mix and strategic growth. Rapid subsea data acquisition and analytics will make it possible to significantly reduce the cost of obtaining high quality data allowing end-users to make more informed operational decisions in near real-time,” Kenny said

“The new technologies and services that Kraken will develop within the scope of the OceanVision project are currently not available in a tightly integrated offering in the marine industry.”

NOAA’s new Cloud and Data strategies aim to unlock the full utility and potential of the agency’s massive and diverse data.

We represent a large pool of world-leading experts whose breadth of marine knowledge and expertise is second-to-none in the UK, enabling us to understand relationships between human activities and our surrounding seas. We develop, work and collaborate with businesses…