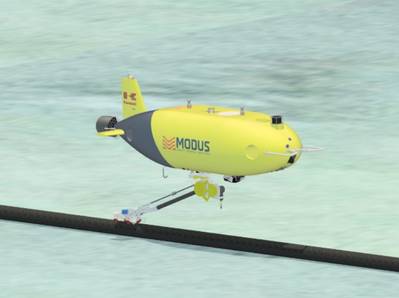 Kawasaki has developed the AUV equipped with a robotic arm in response to the growing demand for pipeline maintenance in offshore oil and gas fields.

SPICE will be used for operations in the North Sea and other areas around the world after delivery to MODUS in 2021. MODUS has committed to acquiring two units of SPICE AUV from Kawasaki.

According to Kawasaki, a robot arm fitted with an inspection tool unit at the end enables SPICE to perform close-range inspections of subsea pipelines not possible with traditional AUVs.

In addition, the Japanese company said, the SPICE is operated using a docking station also developed by Kawasaki, which increases inspection operation efficiency and reduces cost requirements, while also benefiting crews working on a support vessel by reducing their burden and improving safety.

After being submerged into the sea along with the docking station, SPICE AUV launches itself, searches for the pipeline to be inspected, performs inspections, and returns to the docking station once its mission completes. As this entire process is handled autonomously, SPICE does not require a dedicated ROV operator or a highly sophisticated support vessel capable of dynamic positioning, unlike ROVs that used to be the standard pipeline inspection equipment.

"SPICE AUVs represent highly capable systems, delivered by one of the World’s leading OEMs, capable of providing a wide range of autonomous services and data acquisition with high efficiency and quality, down to 3,000m water depth," said Modus.

“This multi-million-pound investment represents a significant expansion of Modus’ capability and fleet. SPICE represents a world-first AUV with an integrated manipulator (robot arm), designed for cable and pipeline inspections as well as more conventional, high quality, high-efficiency surveys. Our strategic relationship with KHI positions us well for growth and cements our leading position in the market” said Nicholas Tompkins, Group CEO.