The MTR100 is a look at the 100 leading companies, technologies and people in the global subsea sector. In the September/October edition, Marine Technology Reporter published the 17th Annual MTR100. Today's spotlight is on Bayonet Ocean Vehicles, recently launched by Greensea Systems Inc.

Bayonet Ocean Vehicles was created to help bridge the gap between open water and the beach with a series of “AUGVs” or Autonomous Underwater Ground Vehicles that can transition from the ocean in through the surf zone and onto the beach.The vehicles are at home in estuaries, marshes, and amongst the dunes and can be used in a variety of military (EOD and reconnaissance) and commercial applications (cable surveys, erosion inspection, wind energy inspection). Built to be very adaptable autonomous platforms with extensive payload support, capable of performing numerous missions and tasks where a ROV, AUV or USV cannot, Bayonet Ocean Vehicles are a powerful tool for operators looking for a stable platform to work in the harshest marine environments.

Bayonet Ocean Vehicles was launched in 2022 through the acquisition of IP and inventory of C-2 Innovations Inc. along with its crawling robots product line by marine robotics technology specialist, Greensea Systems Inc (Greensea). The company was created to further develop, manufacture and distribute a line of amphibious crawling robots based on the original concept of C-2 Innovations Inc. Bayonet Ocean Vehicles now designs and manufactures a product line of amphibious crawlers to operate in areas difficult for other vehicles to operate in, specifically on the beach and in the surf zone environment. They cover commercial and military applications, including hydrographic, environmental and other surveys, coastal dredging support, and littoral warfare such as mine detection and clearance. The Bayonet Ocean Vehicles team is led by Greensea’s CEO and Founder, Ben Kinnaman and the Executive Team, and includes highly experienced industry veterans with years’ of experience in manufacturing and ocean robotics. 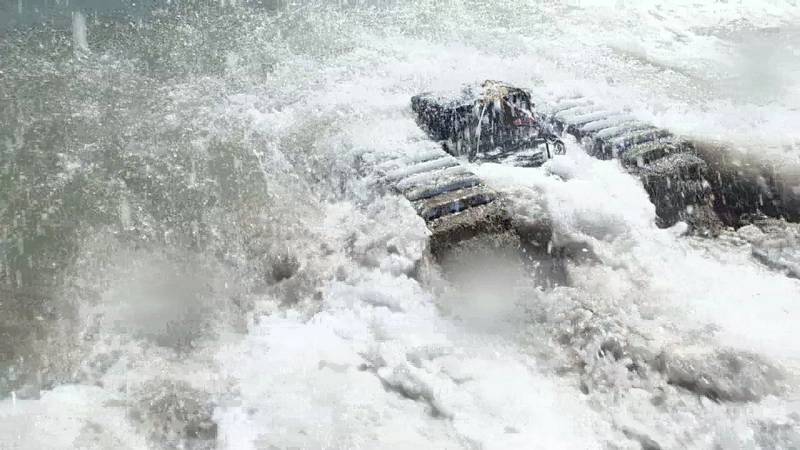 The product line of amphibious crawling robots includes three Bayonet vehicles; the Bayonet 150, Bayonet 250 and Bayonet 350. These are built on OPENSEA, Greensea’s open architecture platform designed to provide precision navigation, payload integration, autonomy and over-the-horizon command and control. Combined with robust hardware, they cover a wide range of payloads and applications. Deployable from land or water, independent of weather, the range of Bayonet crawlers has been designed to transit along the ocean floor, as well as land, making them the only robotic platform in the world capable of working between 40fsw and the dunes on the beach, as well as in deep ocean waters. Bayonet Ocean Vehicles are used for both commercial and military applications, including beach restoration, surf zone search and rescue, offshore wind surveys, environmental monitoring, as well as marine mine countermeasures and explosive ordnance disposal. The Bayonet crawlers provide an easy-to-deploy solution where boats and divers cannot go, using software that is reliable, having been designed, developed and tested for marine robotics in over 2500 robotic units.

Bayonet Ocean Vehicles is participating in a DIU contract awarded in 2022 to develop an Autonomous Amphibious Response Vehicle capable of detecting, identifying, localizing, navigating to, inspecting, and neutralizing mine-like objects on the seafloor, in the water column, and on the shore.

Kraken Robotics announced that David Shea, Executive Vice President (EVP) of Products, will take on the additional role of…