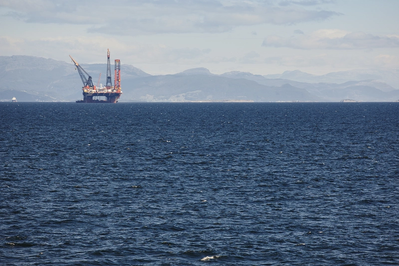 Norway's plan for Arctic oil exploration is unconstitutional because it violates the right to a healthy environment, a lawyer for Greenpeace and the Nature and Youth environmental group told an Oslo court on Tuesday.
The case is the first of its kind in Norway and says a 2015 oil licensing round in the Arctic that gave awards to Statoil , Chevron and others violates the constitution.
Norway signed the 2016 Paris accord, which aims to end the fossil fuel era this century. The country is Western Europe's largest oil producer and oil and gas are its most important exports.
Government lawyers say the case is a publicity stunt that would cost jobs if it is successful.
But it is part of an emerging branch of law worldwide in which plaintiffs invoke a nation's founding principles in a bid to bring about policy change to limit global warming.
"We argue that these licenses are not allowed under the law as per the Constitution," Cathrine Hambro, representing the plaintiffs, told the court in her opening argument of a case likely to last two weeks.
"We ask the court to make a quality check of these decisions, which have large and irreversible consequences."
The state is represented by Attorney General Fredrik Sejersted, which underlines the gravity of the case.
In another sign of its high profile, former Supreme Court judge, Ketil Lund, is advising the plaintiffs on behalf of Norwegian Grandparents Against Climate Change, who are co-plaintiffs.
"Under article 112 of the constitution ... the Norwegian state has a duty to not hurt the climate," Lund, who sat on the Supreme Court for two decades, testified.
First Snowfall
Campaigners packed courtroom 250, the largest at Oslo district court. Some wore traditional Norwegian costumes and made the victory sign.
Outside, as the first snow fell over the city, Greenpeace campaigners had placed a five-tonne sculpted block of ice, engraved with the article of the constitution under which they are challenging the state in court.
"Our goal is that the court agrees with us that licenses awarded in the Barents Sea are invalid and should be withdrawn because it violates future generations' right to a healthy environment," Truls Gulowsen, head of Greenpeace Norway, told Reuters.
The government says it is inappropriate to invoke the constitution rather than focus on taxes and regulations to control greenhouse gases.
"This is a type of constitutional activism we have not seen before and that is different from our legal tradition in Norway," Attorney General Fredrik Sejersted, representing the state, told the court in his opening statement.
"This is an American-style use of our judicial system," he said to some shock laughter in the audience, adding that the lawsuit was a "performance" aimed at getting public attention.
Sejersted told the court the lawsuit by the plaintiffs, should the court find in their favour, would have wider consequences than just suspending the 10 licenses awarded in 2015 to Lukoil, ConocoPhillips and others.
"It would stop all future oil licenses awarded off Norway and would imperil hundreds of thousands of jobs," he said, adding that the case is based on an expansive and political interpretation of the constitution's article 112.
The suit is being heard as nations are gathered in Bonn, Germany, to agree a "rule book" for the 2015 climate pact, which seeks to end the fossil fuel era this century with a shift to wind, solar and other clean energies.
By Gwladys Fouche
• Statoil • Chevron • ConocoPhillips
Email

Domestic and international lenders are vying for a slice of Japan’s nascent offshore wind power sector, which is expected…