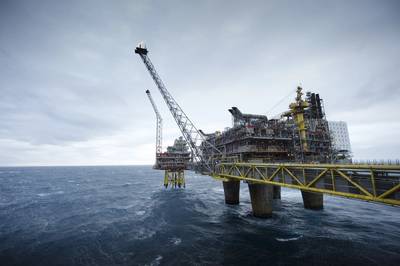 It will undertake the project with infrastructure company CapeOmega, which owns stakes in Norwegian gas pipelines and processing facilities.

"Electrification could result in rapid and large cuts in greenhouse gas emissions," Jannicke Hilland, chief executive of BKK, said in a statement.

Depending on the transmission capacity it could cut emissions by as much as 5 million tonnes a year, or by around a third from current levels, BKK said.

BKK and CapeOmega's joint venture Serene Onshore will notify Norway's energy regulator about its plans this week. However, BKK officials said it could take more than a year to make a formal application, with construction potentially starting in 2023.

"We are in a very early stage, but we've started a dialogue with oil firms to let them know about such an option," a BKK official, who did not wish to be named, said.

The company was considering several options for a potential offshore power supply hub, including at Equinor's Oseberg and Wintershall Dea's Brage fields.

About 80% of emissions by Norway's oil and gas sector come from the use of gas-powered turbines on offshore platforms.

The project could potentially cost up to 26 billion crowns ($2.84 billion), with the first stage estimated to cost about 11 billion crowns, BKK said.

It said it would share onshore investments with CapeOmega, while the latter would be responsible for investments offshore.

CapeOmega has a 16.3% stake in Gassled, which owns Norwegian offshore gas transport infrastructure.

"We have the will and ability to raise the necessary investments that will enable us to provide power to the installations at an attractive price for operators and licensees," CapeOmega's Chief Executive Gisle Eriksen said in a statement.

CapeOmega is owned by Partners Group, which bought it from Norway's HitecVision for 1.2 billion euros ($1.3 billion) in April.

Equinor's Johan Sverdrup oilfield, as well as its Troll A gas platform, the largest on the Norwegian continental shelf, receive power from an onshore grid.

There are plans to extend cables from the Sverdrup platform to nearby fields, including Lundin Petroleum's Edvard Grieg and Aker BP's Ivar Aasen platforms.