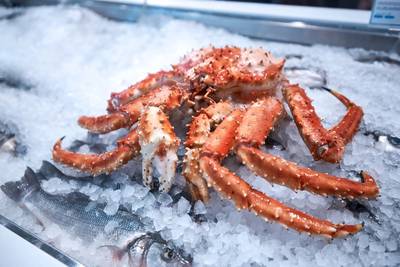 Norway's Supreme Court began hearing arguments on Tuesday on whether EU ships can fish for snow crab off Arctic islands north of Norway without permission from Oslo, a case that could decide who has the right to explore for oil in the region.

At stake is whether the snow crab - whose meat is considered a delicacy by gourmets in Japan and South Korea - is a sedentary species living on the seabed or a fish stock that moves around - and who gets to decide about it.

If it is seen as a sedentary species, then it is a resource belonging to the continental shelf of Norway. If the EU can stake a claim over the snow crab, then it could be harder for Oslo to secure its claim over potential oil and gas resources.

The verdict is expected in three to four weeks.

The issue arises out of a conviction for illegal fishing of an EU fishing vessel, the Senator, in the waters off the remote Arctic Svalbard archipelago.

Norway, which is not a member of the EU, argued successfully in a lower court that the European Commission does not have the right to issue fishing licences off Svalbard, over which Norway has sovereignty via a 1920 treaty.

The ship's owner, Latvian fisherman Peteris Pildegovics, is appealing that ruling to the Supreme Court and seeks to assert a right to fish for snow crab off Svalbard.

"There was no need for a Norwegian licence," Pildegovics told Reuters. "We followed the procedure. Norwegian authorities were kept fully informed."

Pildegovics estimated the loss of income due to the ship's ongoing seizure at about 20 million euros a year.

Norway says only it has the right to issue fishing licences for snow crab.

"The United Nations Convention on the Law of the Sea - the constitution of the seas - is clear on this. It is only Norway as a coastal state that can give permission to fish on the Norwegian continental shelf," Foreign Minister Ine Eriksen Soereide said in an April 2018 column.

In a sign of the importance the case has for Norway, a panel of 11 Supreme Court judges, a higher than usual number, will listen to the arguments during the three-day session starting on Tuesday.

Jensen, the academic, said that according to international law it is only coastal states that can grant licences for the management of natural resources. "So Norway, via Svalbard, is the coastal state in charge," he said.

"Now, the 1920 Svalbard Treaty forces Norway to treat all signatories fairly. The EU does not have the right to issue licences, but the treaty perhaps grants the EU the right to be equally treated. The EU, by issuing their own licences, has ignored these steps and ignored international law," he said.

Subsea industry supply chain companies in the UK are looking a bit more optimistic, with an improved outlook, less redundancies…