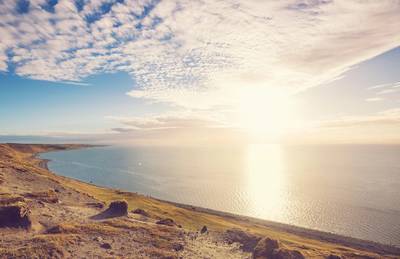 A blob of warm water in the southern Pacific is fueling a decade-long megadrought in Chile, and climate change is at least partly to blame, scientists say.

The "Southern Blob" east of New Zealand is driving hot and dry conditions in Chile, with snow caps melting on the Andes, reservoirs running low and once-lush landscapes withered. Chilean authorities this year were forced to truck water to some 400,000 people living in rural areas.

Research published Thursday in the Journal of Climate finds that human-driven climate change is partly behind the blob, and consequentially the drought, though to what degree exactly is still unclear. Natural variability in ocean and atmospheric temperatures also played a role, the scientists say.

That massive blob – wider than the continental United States – is now 1.5 degrees Celsius warmer than it was 40 years ago. Areas of nearby ocean, however, have warmed much more slowly during that time, and are just 0.2C to 1C warmer, the study shows.

The heat from the blob warms the air directly above it and winds carry the heated air toward Chile. This impacts pressure trends, affecting rainfall and resulting in dry conditions in Chile.

The blob "is only perhaps 3% of the South Pacific, but it's located in such a sensitive area that it produces this chain of events," said study co-author Rene Dario Garreaud, a climate scientist at the University of Chile in Santiago.

While drought is not uncommon in Chile, the current megadrought has persisted since 2010. Some scientists and politicians have begun warning of possible long-term water shortages in the central region, home to vineyards and farms.

Ocean blobs also regularly occur, dissipating within a couple of years. But the Southern blob's prolonged and pronounced rate of warming is beyond what might occur naturally, the researchers found.

"We know that the blob is natural, but it is invigorated by climate change.... why it (has lasted) so long and why it is so intense is because of climate change," Garreaud said.

The scientists said more research is needed to determine exactly how much of a role climate change is playing in this phenomenon. Still, scientists who were not involved in the work said the findings were cause for worry.

"I find it very concerning to see that human-caused climate change is amplifying the severity of megadroughts," said Andreas Prein, a climate scientist at the U.S.-based National Center for Atmospheric Research.

"Such (extreme) droughts are responsible for the collapse of historic civilizations such as the Mayas or the Ming Dynasty, and can destabilize modern cultures such as recently seen in Syria."

The fact that a swathe of warm water, even one spanning more than 8 million kilometers, could impact conditions thousands of kilometers away in Chile shows how broadly climate change will affect the planet, said ocean and climate scientist Dillon Amaya at the University of Colorado in Boulder.

"We need to be cognizant of the changes that are happening in global climate thousands of miles away," Amaya said. "It's all connected."