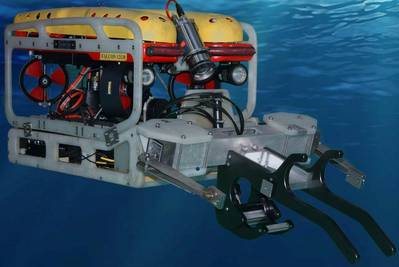 Film-Ocean have developed and patented a chain measuring system for FPSO and Offshore Wind Farm mooring systems which is easily deployed with the Falcon providing results in real time and is accurate to 0.1mm.

Saab Seaeye says that the versatility shown by Film-Ocean’s engagement of the Falcon, demonstrates the success of the design’s concept that has made it the most popular underwater robotic vehicle of its class in the world.

Apart from its proven reliability, operators find a key advantage of the Falcon’s iCON intelligent power and control architecture, is its high maneuverability and steadiness in strong crosscurrents, whilst undertaking exacting tasks with steadiness and precision.