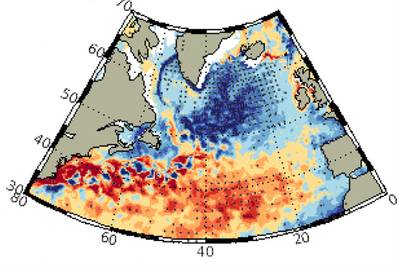 A study by scientists at the National Oceanography Center (NOC) published in Nature Communications Earth and Environment, reveals that the ocean is as important as the atmosphere in causing unusual temperature variations in the subpolar North Atlantic. Furthermore, it shows that the ocean’s contribution has strengthened over the past 60 years at the expense of the atmosphere, pointing to the need for greater understanding of the ocean’s role in setting North Atlantic and European climate variability.

The study by Simon Josey and Bablu Sinha, with UK Research and Innovation (UKRI) funding, employed observations of ocean temperature from the 1990’s onwards and a climate simulation that includes the NOC high resolution (approximately 10 km) NEMO ocean model.  It has been discovered that year-to-year hot and cold irregularities in the amount of heat in the upper level of the ocean, called the mixed layer, are in fact caused about half of the time by changes in heat transported by ocean currents and mixing and not primarily by heat exchange with the atmosphere as previously thought.

To establish possible long-term variations in the role of ocean transports and surface heat exchange, the scientists then applied patterns revealed by the study to historic ship observation data, dating back as far as 1870. It was found that ocean transports have played a more dominant role in year-to-year variability of mixed layer heat content since around 1960, which could signify changes in the Atlantic climate system, however further research is needed to establish this.

“The new results overturn the long-held view that year-to-year-variability in the temperature of the surface ocean is dominated by heat exchange with the atmosphere and establishes the strong role played by internal processes within the ocean itself," said Professor Josey, leader of the study. "It is important to better understand why the surface temperature changes because an unusually warm or cold ocean can influence the atmosphere above and consequently both winter and summer weather over Europe. In addition, the changing role for the ocean that we have found since the 1960s is a potentially worrying sign of variations within the climate system although further research is needed to establish whether it is natural in origin or due to the climate crisis.”