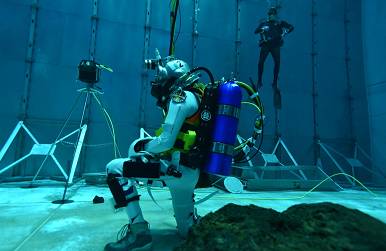 The Inspector comprises a bespoke, lightweight integrated sensor platform supporting the ISAR rotator and the C500 sonar. The Inspector platform can be suspended and lowered from a single lifting point for near-surface temporary deployments or can be placed directly on the seabed using the extendable tripod legs included with the system. A single integrated sensor cable (ISC) connects the ISAR and C500 sonar to the 3D Connect integrated topside unit providing power, control and data.

The C500 sonar is mounted on the ISAR rotator offering a wide range of pan motion. In addition, an adjustable tilt bracket allows simple adjustment of the vertical field of view to suit different applications and environments. A laptop running CodaOctopus Underwater Survey Explorer (USE) or 4G USE software completes the suite providing real-time 3D visualization including integrated pan control of the sonar via the ISAR rotator.

The C500 Inspector system can provide relative positioning and real-time monitoring capability for scene awareness and diver 3D tracking. The C500 Inspector system can also be used to create relative 3D models instantly of the underwater scene, especially useful prior to dive operations to facilitate a safe, context rich environment for the diver.

4D Nav provides positioning and metrology software along with engineering services to the offshore industry. Our products are built by a professional staff to solve the most challenging survey, navigation and visualization problems